"Haha! We did not dissapoint!"

It went like this... members of the audience & Drew Drechsel swordfought Dage the Evil, we did the forbidden zombie dance, talked about American Ninja Warrior secrets, showed random and insane videos, and at some point we may or may not have talked about video game things like Battle Gems. Oh, the audience named our intern, "Hiccup." We had a blast! 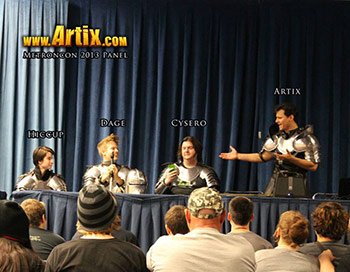 You can see more photos on my Artix Facebook page's MetroCon 2013 Gallery. (Please like all of the pictures. Unless you do not like them. In which case, like them for not liking liking them.) 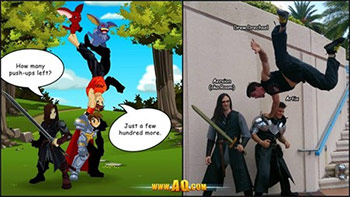 Two weeks ago I posted an image of Drew Drechsel, Aersion (formerlly roam) and my characters from AQWorlds in a crazy pose. I said on Facebook that we would take a photo of us doing it in real life the next time we were all in the same place. Haha, after 20 minutes of Drew doing handstands on my slippery metal armor under the blazing Florida Sun.... VICTORY!!! The only way this day could have been more fun is if you would have been here. On that subject... we are FOUR weeks away from our next convention, DragonCon!