It might be autumn in the northern hemisphere, but that just makes us appreciate the idea of a beach party more! This weekend, find Memet’s Freaki Tiki beach gear in the November Featured Gear shop in your game menu. 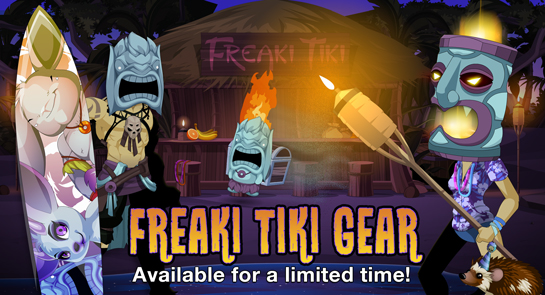 The shop will include:

And remember: if you can't stand the heat, RUN AWAY from the beach /party!

* Only the hottest bank pets catch on fire as they run!

Yorumi's off getting married tomorrow, so to celebrate... TONIGHT you can find the member-only Eternal Flame cape in the Featured November Gear shop! Tomorrow (the day he for real gets married to the fiery, Mysterious Fiancee) we'll release the Fiery Wedding Cake pet and helm!