This weekend, /buff your real-life LUK stat, then log in to AdventureQuest Worlds, because the Shamrock Faire and the Grenwog Egg Hunt are both back in BattleOn! Our Lucky Day and Spring holiday events return with all-new seasonal rare items, the Grenwog Boss Battle, and all your favorite carnival mini-games. 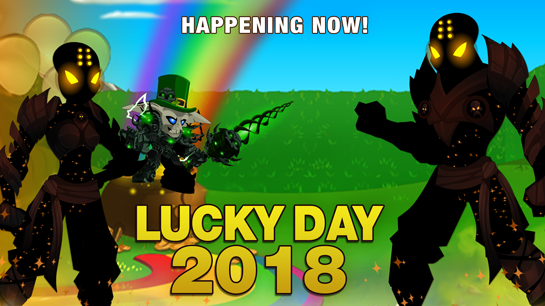 Log in all weekend to get 15% more gold from any quest or battle on our live servers. Get 25% more gold on our PTR server!

Spring into Action with our new and returning Holiday Gear!

Do you feel LUK-y, Hero? If you do, then get in and Battle On as we celebrate Spring this weekend! After you play all the Shamrock Faire's minigames and defeat the Grenwog, check out the all-new event gear. 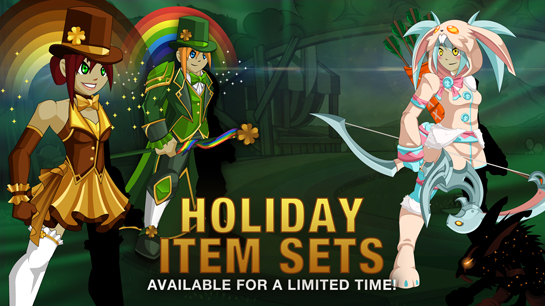 You're in luck! Each of this year's new holiday items is seasonal rare. That means it will return during future Lucky Day and Grenwog events. So if you aren't able to get the gear you want this year, you'll have another chance next year.

How to Have Fun at Shamrock Fair

Once a year the Shamrock Fair comes to town with it's games of chance.  Here's hoping the luck of the Mog-lish bring you treasures of chance.

Wander through the fair and complete the minigame carnival events. Get Golden Tickets as prizes, then spend them in the Shamrock Fair merge shop! and test your luck with our mini-games, then /join luckdragon to help Galanoth get ALL the luck during his birthday Dragon Hunt! 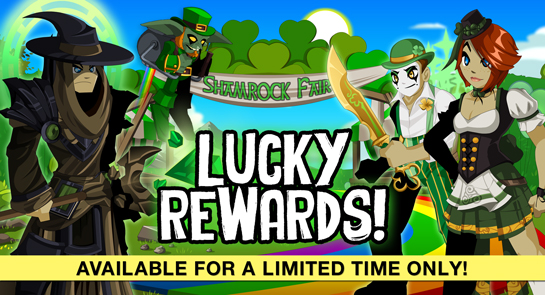 End of the Rainbow

Where to go: join /rainbow
Who to talk to: Woodland Faeries, Roy G Biv
What do to: Monochrome has blasted the Rainbow, help the Faeries make everything right.

Where to go: Join /luck or button in Rainbow
Who to talk to: Mog O'Rahilly and Carnie Sneevils
What to do: Play games and earn Golden Tickets for prizes!

A-MAZE-ing Race: Find the Small Pot O’ Gold in the Hedge Maze and get the Pot O’ Gold Polish from Monochrome.

Clover Fields: How’s your memory?  Pretty good?  Well click the clover pattern for Golden Tickets.  You have 3 chances to get the highest score. (Legend Only)
Jackpot o' Gold: Step up and test your strength! When the pointer is in the red zone click the button for a strong smash and earn Golden Tickets.
Rainbow Run: Grab that gold! Collect as many coins as you can without falling or tripping.  Speed the Sneevil up by moving your mouse to the right.  Slow down by moving your mouse to the left.  Jump over holes and obstacles by clicking the left mouse button.
Ring Toss:  Ring ring! Want Golden Tickets?  Just get as many rings onto the bottles with 10 chances.  Choose which bottle you want the ring to be on with the pointer then hold down the mouse button.  The higher the red in the bar gets the farther the ring goes.
Smack A Sneevil:  Frustrated at Sneevil’s for taking your boxes? Well let it out by using the mallet to whack as many as you can in the time allowed.
Shamrock Smash: It’s your Luckee day!  Use the LEFT and RIGHT arrow keys to control Luckee and bounce
Daibh's Smack a Makai: Daibh the Sneevil is a HUGE fan of the Legion. And, therefore, NOT a fan of Nulgath or his pet Makais. Smack Makais and he'll reward you handsomely.

The Cuddly GrenwogSlayer armor set was created by fellow AQW hero and community artist, Nakana Rei, who also drew this adorable graphic inspired by the set. 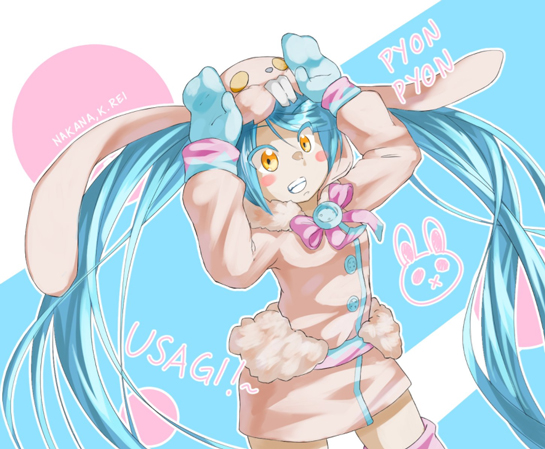 Each piece of the in-game armor set comes with a 20% gold boost. BUT If you're a member and don't have time to farm for the set, you can pick up a version of the armor set (without the gold boost) immediately from the Featured Gear Shop.