Gear up and buff your LUK to make sure your HP stays high... because this weekend, ALL servers have a Double Class Points Boost! You're going to need it, because once you're doing carousing around the Lucky Day Faire (/join luck to head there!) and creating puzzles in our new Battle Gems Mini carnival game, it's going to be time to battle your way through Lore as an Evolved Dark Caster! 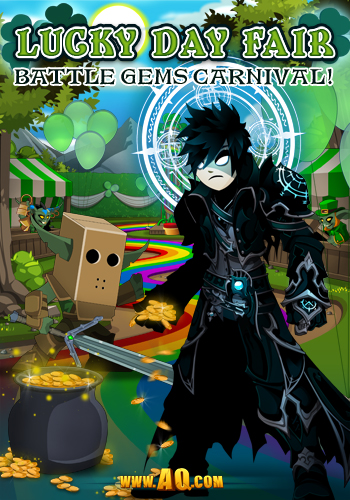 You can get the Evolved Dark Caster Class from Dage in Battleon for 2000 AdventureCoins OR with 2000 Legion Tokens. That Class will be available for at LEAST one month from today. The Shamrock Fair will be in town for at LEAST a week so make sure that you meet all the carnival NPCs, Take a stroll through the hedge maze, play all the mini-games, and bring home LOTS of awesome Seasonal Rare Prizes!

But remember, you can only EARN these prizes by winning Golden Tickets from each of the fair games! If you're already an AQW Legend, then you get a leg-up on the competition (as always). We have a SPECIAL MEMBER'S ONLY FAIR GAME that gives a lot more Golden Tickets than the other games... but you'll want to try the others anyway. They're so much fun!

Also, if you feel like you need a little extra luck, the Fair Fairies who greet you at the entrance to the fair are selling a Lucky Hat for Adventure Coins that DOUBLES the amount of tickets you win at each game!

Step right up, Hero, and test your puzzle-prowess with the Lucky Day Fair’s newest game: Battle Gems Mini! Connect rows of gems to clear the board in under 42 turns to win… then create your OWN puzzle board and share it with friends! You'll just need to copy the code, then pass it around and your friends can try THEIR luck with YOUR puzzle!

Battle Gems mini is a based on the full version of the Battle Gems mobile game (with combat, monsters, gear, skills, quests, and more) coming soon to the Apple app store! It is NOT an exact replica of the game; the minigame doesn't have combat, quests, or items... so if you want to get your paws on THAT awesomeness, you'll need to wait til Battle Gems hits your iDevice.