The Superbowl LI In-game Event is ON

Log in during the Half-Time Show to Punt Twilly!

It's the biggest American Football game of the year!* On Lore, the Loyalists and the Doom Phoenixes (what the real world knows as the Patriots and the Falcons) are preparing to face off! After the 2nd Quarter ends, the Superbowl halftime show will begin... and so will our special event!  When you've had your fill of watching Lady Gaga rock the stadium, Log in and head to Battleon for our once-a-year PUNT TWILLY minigame! 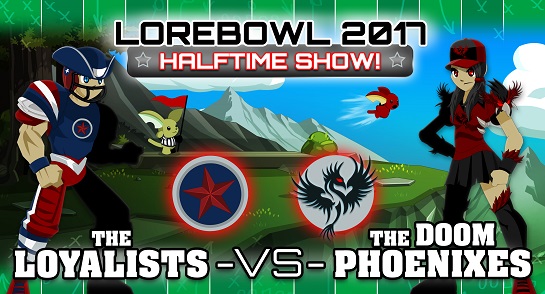 We've got a stadium's worth of new gear from guest artists, Goddess! So no matter which side you're rooting for, you'll find Loyalist and Doom Phoenix:

Don't forget that this is the ONLY time of year that you will be able to get the Moglin Punter Character Page Achievement Badge and all you have to do is kick Twilly the full 100 yards!