A few weeks ago, I got the crazy idea to start up a new contest on the Forums. In the past, we’ve hosted Art contests, cookie-making ones, and even a pumpkin-carving competition that resulted in a particularly unlucky gourd that exploded into flames.

But this Comic Contest was my favorite one yet!
Over 750 of our friends submitted amazing comics that had the entire Secret Lab laughing out loud. Yours truly spent the past 5 days going through each entry and compiled the images into the biggest ZIP file I have ever seen. And tomorrow… these comics will face a panel of AE Judges to determine the winners!

I gatta admit, I have never LOL’d this much. Ever! And, if you know me, I’m always laughing about something. Always. But one particular comic really touched the laugh-boxes of everyone here at the Lab. 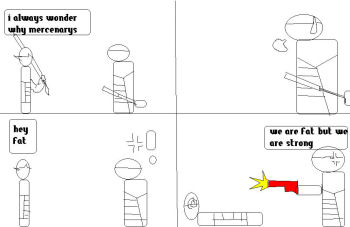 This hilarious masterpiece was made by your fellow player, Skymage55. As one of the first few submissions received, Skymage55’s work made me laugh so hard that I immediately showed Nightwraith and Titan from EpicDuel. After hearing the roar of laughter, everyone else at the Lab gathered around to see what was so funny. A few seconds later, the hallways became flooded with “HEY FAT” exclamations and cheers of “we are fat but we are STRONG!” Yea, we’re all a little weird here…

So this has been going on all week, folks. Dubbed as the “HEY FAT!” meme, Cysero took it upon himself to even make an E-Honda avatar inspired from this one comic.

If you have been following us on Twitter, you have already felt the meme’s effects. A bunch of you have joined in the meme fun, wondering why mercenarys—HEY FAT!

On Friday, the winners of the Comic Contest will be announced on a special page devoted to them. I cannot WAIT to see which comics come out on top! Even though you guys are all winners for making me LOL so much that Lim tried to hadouken me 192 times in the past 72 hours…

Next week I will be embarking on a top-secret mission to an uncharted realm in the middle of Earth’s largest Ocean. Some people call this a ‘vacation’… I call it a QUEST!
My lovely GrandNPCs are celebrating their 50th Year Anniversary and have invited me to /join their party! For the next 2 weeks, I will hang-up my Pink Armor and equip the more appropriate Battle Swimwear (still available in the Battleon Summer Shop!). I’ll even use a SPF 20 Enhancement on my skin to help protect me from Lvl 100 critical sun rays as I explore my new surroundings. I hear there are many new Monsters and NPCs on this island… and I will be charting my travels in the form of random Twitters and photographic evidence! 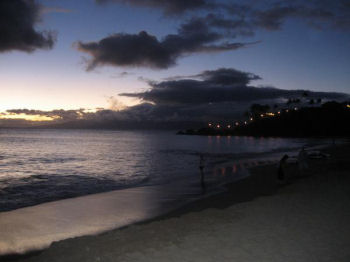 I am even told that there is a beautiful deity who lives on the island, powerful enough to control fire, lightning, and volcanoes. I wonder if I am going to meet such a Maiden on my travels…