This Friday, we will launch an update to one of the most popular classes around, the Legion DoomKnight! We're updating the class now to coincide with Dage's birthday, plus we want to make sure it stays as strong and competitive on the new server as it is in the current one. 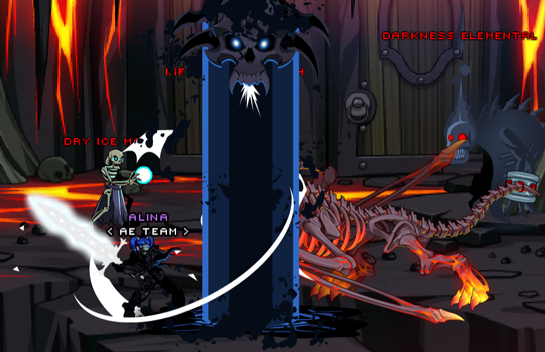 If you have an upgraded account, you can try out the skills RIGHT NOW and let Arklen (our lead class designer) know what you think! The skills may change based on player feedback... so if you want to have a hand in fine-tuning our newest class, now's your chance!

This is the "test" version of the new Legion DoomKnight class so you can try the changes/rebalance out in advance and let us know your thoughts on the skills. Once the class is ready to go live, its skills and art will change to those of the Warrior Class. You can keep the "test" version with the Warrior class skills/art as a souvenir of your participation in the test. The item's name will stay the same: "Legion DoomKnight Tester"

Once the class does go live, it will be available to ALL players!

Right NOW, though, members can find the class in their game menu and get it for just 10000 gold. Huge thanks to Arklen and the class balance team for their work!

Design Goals: The general idea here is to reduce the burst potential of the Legion Doomknight while improving upon its long term fight capabilities, especially when it comes to damage. We are moving away from Luck being the primary enhancement for all classes to add more diversity to your enhancement pool. Fighter and Hybrid will provide you with the resilience you need to compensate for the weaker heal. The improved maximum stack on Touch of Doom is a huge damage boost from the Classic Legion Doomknight so longer fights should end sooner.

Changes: Touch of Doom has been changed to stack to 15. Touch of Death and Doom have been lowered to 3% per stack. At first, this buff is not as strong. BUT as you get closer to 15 stacks though, it will dramatically outpace its old damage.

Changes: Soul Siphon cooldown has been lowered to 5 seconds from 6 seconds and the heal is based on current health instead of Attack Damage. The heal is lowered overall but you’ll be able to spam it more frequently.

Changes: Legion Dark Blast Torment and Shadow Step aura has been increased to 5 seconds from 4 seconds.

Changes: Imminent Doom has been lowered compared to the original's DoT, but lasts for 15 seconds now. Damage on hit slightly lowered to compensate DoT damage boost from Touch of Doom buff.

Again, these skills MAY change... that will be based on your feedback and what our designers see while you test.
Tags: Alina,
Read more Design Notes