Blind your opponents with the gleam of your gear! Upgrade your account with a 1 Year Membership Package before the Golden Plate set leaves... forever! The package comes with the bonus Golden Plate armor, helm, cape, and weapon AND 7,000 Bonus Adventure Coins.

And later this week, the Golden Plate Set will be replaced by...

Command the battlefield and control thousands of warriors as a Jade Samurai, one of the Yokai's most-skilled military commanders! Long honored across Lore for their battle prowess, the Jade Samurai is also one of the highest ranks in the Emperor of Yokai's elite personal guard! 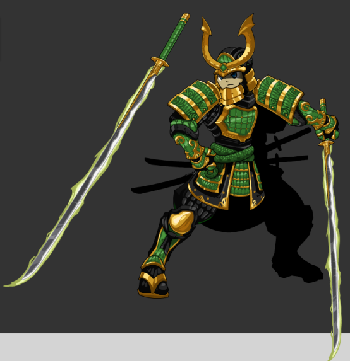 And we thought you'd like a behind-the-scenes look at just how such an epic armor is created! In the picture below, you see how he's got reference pictures of a samurai armor, and then also an image of jade, to get a feel for the colors in the stone. 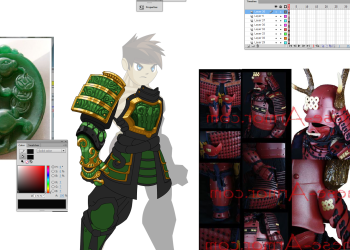 Because we received MANY requests to switch the items attached to the one year package more frequently, this set will not be available as long as the Golden Plate Set was.

Thank you for supporting us by purchasing Memberships and AdventureCoins! We can't wait to work with every Good, Evil, (and Chaotic?!) Hero in Lore to make 2013 the most explosively amazingyear in AQWorlds' history!