Greetings, heroes! Earlier this month, we released the Diabolical Tome pet as a quest reward and because of an oversight, we inadvertently released an abusable AC sellback exploit into the game. In general, our policy is not to punish players for our errors unless they excessively abuse those mistakes. 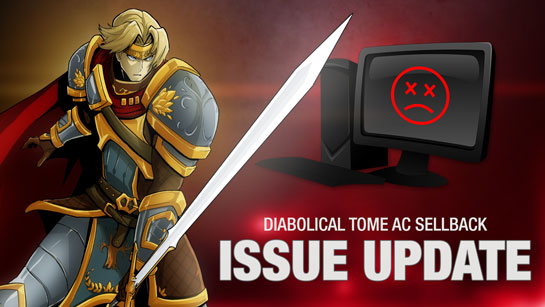 Some players abused the sellback error (accumulating up to hundreds of thousands of ACs by selling the pet over and over). We ran a query to remove the free ACs from those accounts (which sets them to negative ACs, for example: -25,000 ACs).

There were also a number of players who weren't intentionally abusing it, but who may have gotten the pet and sold it without paying attention. Those players were included in the query when we were fixing the issue. For those players were set to -900 ACs or less due to the Tome sellback issue... we have fixed your account by giving you 900 ACs to make up the difference.

How did this happen? The story.

Because this item was created by Hikari, one of our artists, as a birthday present, I changed the price from 1,000g to 0 AC. Unfortunately, when I added the AC tag to the item, I did not change the price from 1,000 to 0. That means... the item was dropping and could be sold back for 900 ACs. That was my mistake, and because it was a last minute change... it did not get caught in testing.

We realized many players were getting the drop and selling it over and over in order to gain a lot of free ACs very quickly. Because players pay real money for ACs, this is something we had to fix, and quickly.

Though this was a developer mistake... we ask that everyone agree not to abuse exploits or glitches. In this case, a small oversight caused a big headache. So we've updated our admin site to show more information more easily in order to avoid this specific issue in the future.

If you were impacted by our sellback fix through no fault of your own, I sincerely apologize for the inconvenience. Thank you for not abusing a glitch. If you previously had -900 ACs because of our query, you should see that 900 ACs have already been applied to your account.

If you have a negative AC amount higher than -900 ACs due to selling the Diabolical Tome repeatedly, you'll need to pay back those ACs to reset your AC amount. If you have questions, you can contact Player Support via our Help Site.