Friday the 13th: Dage vs Shrade

The Month of Evil + the Unluckiest Day of the Year

Evil. Darkness. DOOM. And... Friday the 13th?! That's right. This weekend, we're celebrating the darkest month of the year with the unluckiest EVENT of the year in a double-holiday war... for POWER! Log in this weekend and head to Aurelio Voltaire's library for a story of fear and horror... of underworlds and lost souls... and creatures pulled straight from your nightmares. Of Dage the Evil vs SHRADE in the Splatter Realm! 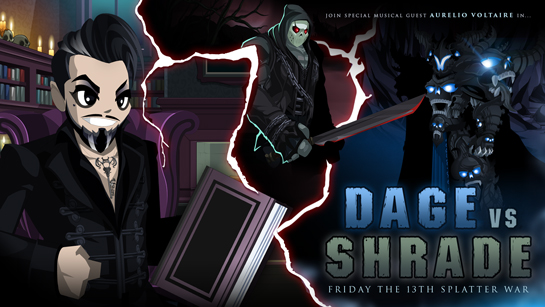 The adventure begins as you battle through the Underworld to help Dage the Evil unlock the mystery of a Puzzle Box that promises to take him to a world even deeper and darker than the one he rules.. But to take control of it, he'll need to take out the creature guarding its gateway: SHRADE.

This weekend, /join puzzlebox to begin your cursed underworld adventure and...

Once the war meter hits 100%, battle to collect the pieces of the 0 AC Legion Shrade armor set from the war boss! 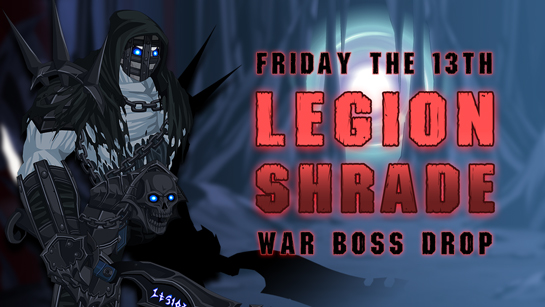 Friday the 13th and Aurelio Voltaire go together like Evil Armies of Undead and Horror Movies. So of course, this Friday our always-positive, family-friendly game team and community want to welcome him back for another musical event! 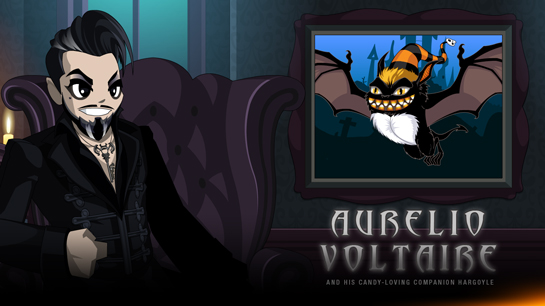 Aurelio Voltaire is the maker of music, films, books, comics, toys and... mayhem. He has appeared in almost ALL of the AQWorlds Friday the 13th events... and has become a fan-favorite for our players (not to mention beloved by goths, trekkies, and music-lovers in general).

This weekend, slay your enemies to the sound of music from his album “What are the Oddz?” but before you begin the adventure in /puzzlebox, take a moment to admire Aurelio Voltaire's sweet portrait of his candy-loving companion, Hargoyle, star of the Legend of Candy Claws book and super-cuddly plus toy. (Get yours from his online store here)

On behalf of the entire AdventureQuest Worlds team, we want to thank Aurelio Voltaire for being a part of this special event!

Starting tonight and through Friday, April 3rd, you'll be able to find the spookiest, evillest Friday the 13th gear EVER in your game menu! 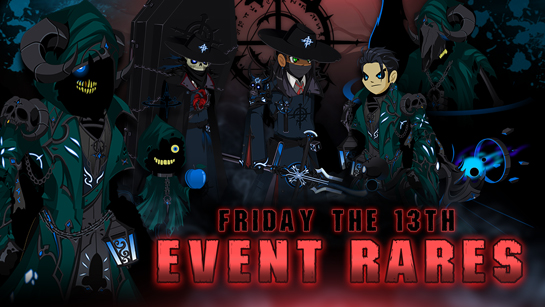 Your luck is in! Log in at battle through our Friday the 13th update this weekend  and get 2X gold, reputation, class points, and experience when you defeat monsters and complete quests. 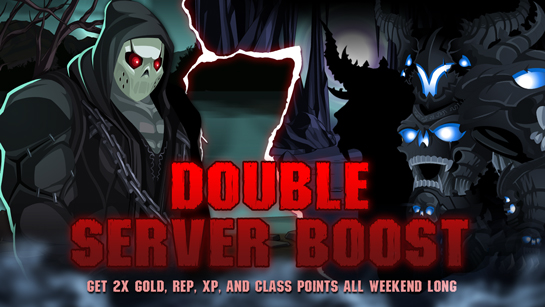 Battle alongside your fellow heroes to defeat your enemies to defend the Splatter Realm... or conquer it! For many of you, this will be the FIRST war you've ever fought in, and you're in LUCK! (Even though it IS Friday the 13th...)

But if you're not sure how to fight in an AQWorlds war, then read on!

You and the rest of the heroes in Lore will all be fighting together to reach a common goal: victory! With every additional hero who battles in the war, you'll reach the 100% mark that much faster... and that means you'll unlock the rewards and storyline ending sooner, too!