You survived my Pink Army…

Friday the 13th has passed… but the PINK nightmare is still a reality! Don’t believe me? …uhhh have you seen the length of this post? Well you soon will if you haven’t already scrolled down a bit…

Alright, let’s get right to it. Last Friday… if you missed it by some horrendously unlucky reason… we shared the BIGGEST, BESTEST, and CRAZIEST event to date with over 34,000 of our closest friends! That’s right; since the dawning of AQWorlds, we have NEVER had a higher turnout of players! Thanks for helping make history with us! 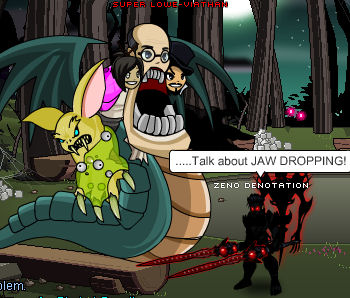 With so much awesome going on in game… we had a crazy thing happen over here at the Lab. This was where the “bad luck” of Friday the 13th came into play (hehee, get it, cuz it’s a game that we all play…uhh…). We have had our servers crash before while hosting these crazy Events… but ummmm last Friday, we sorta brought down the ENTIRE gaming network. Ahaha, WHOOPS! If you were online around 8pm EST on Friday, then you might have noticed not only AQW going offline… but also DragonFable, MechQuest, EpicDuel, and the original AQ.

Needless to say… that was pretty epic.

A few minutes later, we got all the serves up and running again, and the entire Lab was filled with /cheers of over-caffeinated joy for managing to release this Event without any other mishaps.

…or so we thought.

Achievements & J6’s Invisible Items that are no longer invisible

The Stubborn Achievement was supposed to be set to “100 times”, not 10… and from here on out, the achievement has been changed accordingly. So if you were one of the few to get the badge after only 10 times… Gratz! And if you have absolutely no idea what I’m talking about… ask a fellow “stubborn” player!

And for some strange reason… the 5 RARE weapons that J6 made somehow vanished from the AC Event Shop. We have no idea where they went to, but it is confirmed that they are now back in the shop, ready for purchase. Speaking of items… the Rare Friday the 13th Items will be taken out this upcoming Friday, so make sure you get all the Rares you can while you still can!

Since this post isn’t nearly long enough, let’s get into some juicy details in this week’s upcoming release!  We are finally ready to journey to the magical realm of Arcangrove. Arcangrove has always been a powerful place, home to ancient magi who built their renowned tower on its land. The Arcangrove Tower has become the center for all magical research and study in all the lands surrounding Battleon.

But as of late… something has gone horribly amiss with the magical energies. What started as a small quiver in their power has become an outright earthquake. The magi are losing their handle on the forces of nature and the power of magic itself. Unless something is done soon… it could mean the end of all magic on Lore. (Lim pipes in with: SCIENCE!)

Things to possibly watch out for while making your journey through Arcangrove:

Since it is Monday, I can’t surprise you with any spoiler pics. Why? Well the week only just begun, and even though our artists are super amazing… no one can work that fast, not even with a +20 agility boost.

OH but wait, there’s more! Due to popular request, the Player Suggestion Shop will be receiving a bunch of new items suggested by you and your fellow adventurers. We have so many great, talented artists out there that it was hard to narrow down our selection.

If your item gets selected and put in game… congratulations! But if not, then don’t give up! There are so many amazing ideas out there and we just don’t have the willpower to make them all. So keep on tryin’ and maybe one day you’ll see your beloved masterpiece in game!

My DerpFish made it in, after all. LOL!

So is that it? Probably not. But once Artix sees this post of mine… can you say Chainsaw Eyes, maybe? YIKES!