Zhoom and Yorumi worked all day investigating the Flash Player issue which released for FireFox users after Adobe's latest update. This shouldl reduce some of the problems Firefox users are experiencing.

We will keep working on our end while we wait for Adobe to fix Flash Player. To be certain you can play without these new errors, we reccomend playing on Internet Explorer or Chrome.

Since last week, we've received a large number of reports about characters not loading, AQWorlds lag spiking on all servers, and helm definition not resolving. Cysero, Yorumi, and I spent the morning running around on all the servers, talking to players and comparing what they had equipped and whether they displayed to other players. 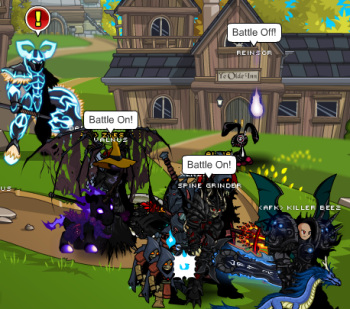 One of the hardest bugs to fix is one that doesn't happen 100% of the time to 100% of the people. Characters and servers breaking for me and other players were fine for Cysero and Yorumi. We realized after hours of logging in and out, comparing character pages and item IDs, that:

The issues are based on what version of Flash Player your client (your computer's version of the game) is running.

Your computer's version of Flash Player is based on what internet browser you are using. The latest version, 11.3.300.262, is the one with problems. We are not experiencing the issues on Internet Explorer or Chrome.

How to find your Flash Player version

Go to http://www.aq.com/play-now/ and right-click on the login screen window. You will see a dropdown menu with your version of Flash Player listed: 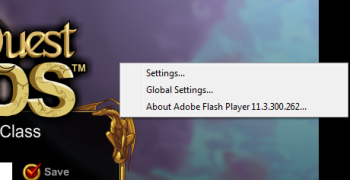 This is the latest version of Flash Player.

What you can do to prevent these issues

For now, the simplest way to enjoy playing AQWorlds without experiencing a large number of these Flash Player-based issues is to use Internet Explorer or Chrome for your internet browser.

What WE are doing to address these issues

Correcting these problems is our highest priority right now! We've got Yorumi on the case AND pulled in Zhoom, the CodeRanger, to trouble-shoot with his Bow of Bug-Slaying +257.

We will do everything we can to correct these Flash Player/AQW interaction problems. Artix says we aren't allowed to go home until we know more information/have a fix, so /cheer Zhoom and Yorumi on!