Warlord Tyndarius is Recruiting for the Scourge...

STORY TIME: Late one Friday night after a AQWorlds release, the team stayed and had serious discussions and story planning for the new continent. We choose to combine the element of Fire with the theme of the Spartans in 300. Instead of just creating some random monsters, we actually designed an army... detailing each of the roles within the Firestorm Onslaught's military. 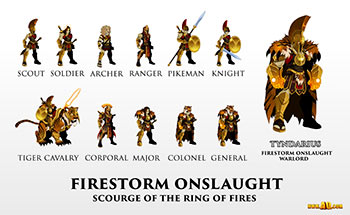 Tyndarius is the Warlord in charge, and his story is one of tragic sacrifice and conquest. To join his army... and please note, these are the villains, not the good side that you will be a part of when the story begins... you have to do something that no sane person should never, ever do.

Which Rank Would YOU Fill In His Army?

If you could join the Firestorm Onslaught (remember, these are the BAD guys!), which role would you choose?