Last night, we released the first part of the Chaos Saga Finale... and Chaos has reigned since then!* This release was one of the biggest we had EVER worked on, with 17 cutscenes in 23 places over 6 maps (that is over a month's worth of normal release content)! 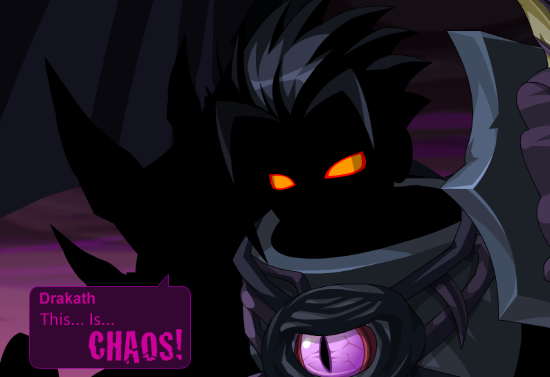 Though we worked on this for a full 2 weeks, and a number of you guys were able to finish the release, many more were not due to a quest complete timing issue.** This issue looked to be fixed in testing, but upon hitting the servers under load, we saw it reappear... and for that I apologize.

We have added in new code that should fix the issue. Testers are confirming that this weekend, and Monday we will add it to Sir Ver so that Legends can help us confirm it under heavier server load. If all goes well, we will add it to all other servers next.

Until then, this weekend, you can play through the first of four Chaos endings in the /dragonbattle map if:

Those who did finish the release will be able to quest for Drakath's Armor later tonight, when we remove the Wheels of Doom and Destiny.

This is hands-down the HARDEST quest in-game, and word is starting to spread about what it requires! It will only take you 13 days to complete IF you already have some of the most valuable items in-game. This is absolutely end-game content, for those people who have finished all of the storylines and want a new, more challenging goal to complete.

Shortly before midnight server time, the Wheels of Doom and Destiny will be removed from the game. The merge shops will remain, as previously announced.

* When we called this the Summer of Chaos, I did not think we were literally predicting it!
** This is the same type of problem that makes it difficult for some people to complete the Voltaire quests in the /saloon map, and can quickly become a complex one to fix.