Defeat the Champion of Chaos to Save the World!

This weekend, the Final Battle against Drakath BEGINS! The time has come to face Drakath… and END Chaos’ reign upon Lore once and for all. Face Drakath and his minions in a multi-stage boss fight which will leave your world scarred but, if you succeed, FREE from the Champion of Chaos and the Queen of Monsters! 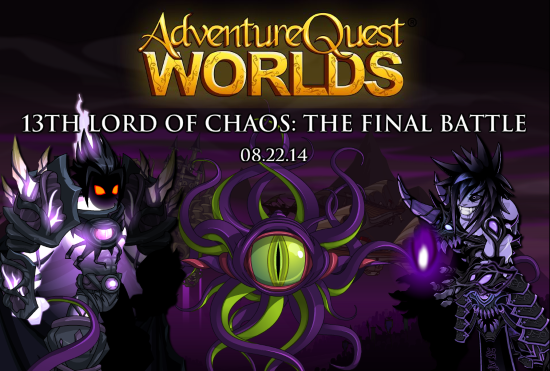 The Champion of Chaos is waiting... for YOU!*

* Pictured above is the Chaos Champion Prime armor, available in the Rares shop.

Prepare to face Drakath: Make Sure You're Caught Up!

And the best way to do THAT is having played through this summer's Chaos finale (guide here)! If you don't have time for that this week, there are a couple things you MUST do before being allowed entry into the Confrontation map.

Then, and ONLY then will you be ready to begin the final battle! And here's a sneak peek at what it entails:

NEXT week, you'll play through the conclusion to the 13 Lords of Chaos Saga... and THEN we will begin preparing for the NEXT main saga. But first you've got to take down the Champion of Chaos! /cheer

Reminder: AQWorlds is NOT ending after the 13 Lords of Chaos storyline! Geopetal has already written the first 4 weeks of the NEXT storyline which we are calling

NO SPOILERS! You're getting as bad as Artix! - geopetal

This is the Battle of a Lifetime!

The story of AQW's 13 Lords of Chaos finale is one Artix has written over and over in his head for the last SIX YEARS! The ideas for it have been in his head and in his heart since before the game began. This is the story of his lifetime, and ours, and hopefully... yours!

I still remember the day I was driving home, and he called to tell me the TRUE identity of the 13th Lord of Chaos. I was so excited to start building the finale that I almost turned right back around (and would have, if two semi-trucks did not have my little blue Fiesta blocked in).

Many of you know by now what that identity is, but some of you don't. I hope you are as excited as I was when you /join Drakathfight and learn who you have been, are, and will be in the world of Lore!Because what you've learned about your hero character - and what they have done during their lifetimes - is something that NONE of our other games have revealed.

The actions you take in this upcoming release will show that you are truly worthy of the powers you have come to wield. But just what those actions are... ah, now THAT is a reason to log in this Friday!