The Dragon of Lust's story continues this Friday!

Last week, we release Lascivia's zone, the latest update in our 7 Deadly Dragons Saga. With an enchanting-but-evil dragon (from the human point of view, at least), beautiful royal captives to save, and a plot twist that'll have your neck cracking, the Dragon of Lust became a fan favorite for the storyline. If you aren't caught up on the story, head in-game and /join lust to begin the adventure! If you are.... prepare to meet Killek Deadchewer this Friday. 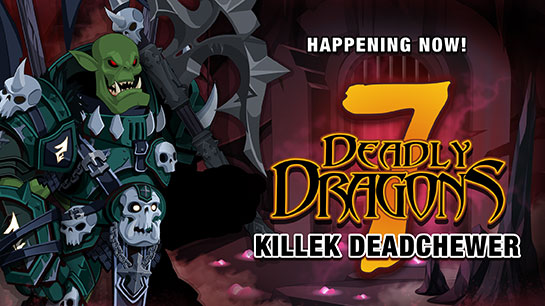 Not much is known about Killek's life before devoting his blood, breath, and blades to the Dragon of Lust. What IS known is that he was one of the most ferocious warriors in the Bonebreaker Bandit Brigade -- before being exiled for having a midnight snack... on his comrades. 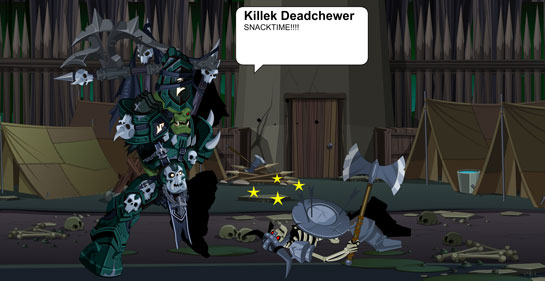 Of all the creatures on Lore, only Lascivia, Dragon of Lust, understood his hunger and rage, and what he needed to feed them. He became the most devoted of her admirers... until he grew TOO dangerous to the rest of the hoard.

With great sorrow, she ordered him locked away, to protect the rest of her princes and princesses. But after the events in last week's release, Killek is even angrier. Hungier. DEADLIER.

With his mistress gone, he MUST be...restrained. Good luck, heroes.

AdventureQuest Worlds is a timey-wimey game and, much like the nature of time itself, it's not always linear. This week, in addition to battling Killek in the present, if you have the BoneBreaker Adventure Pack, you can head back in time to 2014 and encounter him Braddock Bonebreaker's fortress.

If you have access to the BoneBreaker adventure pack, I recommend going there and completing Shara KinRunner's 5 new quests to (re)introduce yourself to Killek, then head to the new 7 Deadly Dragons update.

Learn the backstory of how Killek came to leave Braddock Bonebreaker's fortress; why he needed to venture out into the world, where he met Lascivia, the Dragon of Lust. Then battle him to unlock his armor!

Back in 2014, we released the BoneBreaker Fortress: an exclusive zone, quests, boss battles, and gear. All you need to gain entrance is the Adventure Pack OR an active membership. 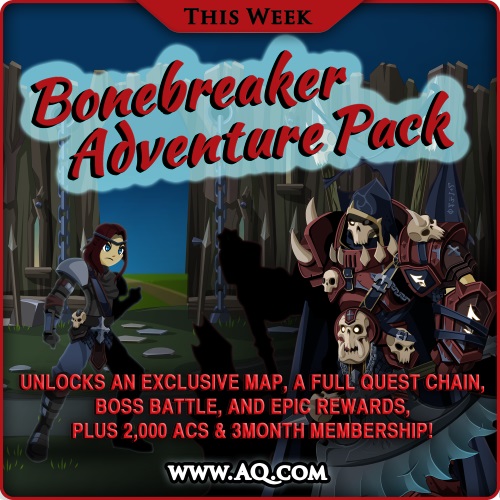 The Adventure Pack comes with:

This Friday, the zone will get:

* Plus all the usual member perks
** The art (used to create the Killek monster) is a variant of the Bonebreaker set originally released with the update, and is only available from the /bonebreak map.

Why an expansion package instead of a normal upgrade set?

We had a ton of players excited for Dage's new Bonebreaker Berserker set, and so were we! But rather than just attach the armor set to a 3 month membership package, we wanted to do more with the character and give you more value for the money you'd be spending.

Can I access this if I have an active membership but don't buy the package?

Will this be part of the main story?

The quest chain and boss battles are all optional side content and will not feature in the main story, but you'll get to battle a massive boss (seriously, this guy's beefy!) and reap the rewards of your victory! If you defeat him, you'll unlock a quest to plunder his hoard to unlock additional prizes!

How long will the package be available?

The Bonebreaker expansion package, unlike our other upgrade sets, is not planned as a limited time offer.

How to Unlock the BoneBreaker Package?