We've begun testing the class that Vader Darkside wish for and we've reached a point where I am comfortable enough with the existing version to tell do the Skills Breakdown for you.

Before we get into it let me say that it's a REAL pain coming up with a concept, art, testing, tweaking and balancing an entirely new class from scratch in a week. Makes it about 10 times worse when we're ALSO trying to get a special event like Friday the 13th out on the same day. Vader Darkside's WISH was just so generous that it made us really want to do right by him. Darkside, I hope you are happy with what we've come up with!

A Few Facts About The Darkside Class.

Addons: When designing the class art, Dage The Evil also designed a really nice Hood and Weapon for the class. These items will be obtainable from Dage's Legion Shop for hard-to-get tokens. The Golden Cheezburger item itself will turn into the class.

Release Date: We will be releasing it this Friday the 13th! Tell your friends (So they will quit asking over Twitter and on the forums)!

Enhancement: Vader Darkside wished for a caster class so this guy does all magical damage. I highly suggest Wizard Enh, but feel free to experiment and let us know what combo you like!

Vader Darkside wished for a class with a lot of AOE (Area Of Effect, or Multi-hit) attacks which was not as strong as Necro but still a good solid farming class. I think that is just what we've built for him. 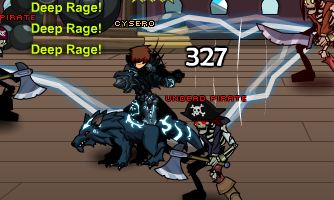 That means that while this class is GREAT for taking on lots of monsters at once, it's not great at bosses. It has some skills that will be useful in PvP but I wouldn't recommend this as a PvP class.

A basic attack taught to all adventurers.

You've all seen this before. But it's interesting to note that both you AND your pet auto attack at the same time. This doesn't give any damage increase as the average AA damage is spread out between both of you.

Summons your Battle pet or focuses your anger through your pet to DOUBLE their damage for a short time.

You know what this is if you've ever played Necro or Horc Evader. If you don't have a pet equipped (Battle Pet or even a normal pet) then it will summon the Hate Wolf to your side. If you already have the Hate Wolf or some other Battle Pet summoned, then it's a REALLY nice buff. I suggest using this after you have a few stacks of Deep Rage built up. We'll get into that in a second.

You strike out at your foes with arcing energy, doing light damage and applying Deep Rage to all foes hit. Damage increases with stacks of Deep Rage which stacks up to 5 times.

We couldn't built a caster class for a guy named VADER DARKSIDE without adding lightening shooting from your hands! This is your go-to skill. The cooldown is rather long for a skill that applies a stacking aura but since you can hit multiple foes you can get 3 or even 4 stacks at once. Then activate Blood Boil and BOOM, big hits and bigger crits on everything in sight.

Light damage to all enemies, 25% chance to stun all enemies in range for 4 seconds and reduces enemy damage. Damage reduction increases with stacks of Deep Rage.

This is your damage mitigation spell. Use it when things are getting hairy to reduce incoming damage, do a little of your own damage on the side and possibly stun one, several or ALL of the enemies you are facing. It's not too costly and it only has a 10 second cooldown which means you should use it often if you want to be successful.

Pretty basic Rank 4 passives here. Do more damage and do it faster than before. The haste buff comes in handy for the next skill.

Requires at least one stack of Deep Rage. Restores some Health and Mana but reduces Haste severely for a short time. Health, Mana and Haste Reduction increase based on stacks of Deep Rage.

This spell pretty much ensures that you never need to stop farming. Ever. Notice that it has NO mana cost. Just click it and you get Health and Mana back but you HAVE to know when to use it. If you let your life or mana get too low before you use it, the Haste Reduction will get you killed by whatever mob of monsters you have attacking you from all sides. Use it right and you are an unstopable farming machine!

You can no longer contain your rage. It explodes from you in a magical wave. All enemies in range take high damage. Consumes all stacks of Deep Rage.

Here's the cherry on top. Small % to proc this spell which devestates anyone or anything in your area.

There you have it. The first new AQW class of 2012, courtesy of fellow player Vader Darkside!

We will continue testing the class for the next two days so some of the cooldown or mana costs might change in the final version, but this a pretty solid class right now so I don't expect big changes, if any are required at all.

Only two days (not counting today) until our next Friday the 13th special event featuring rock god and all around cool guy, Voltaire!

This story will be based on a few of the songs from his newest album. The event will become a PERMENANT ADDITION to the game but like all special events, will feature an Event Rare Shop featuring some very special items (including the latest version of Voltaire's Hat) so now might be a good time to spend some of those AdventureCoins that you got for the holidays.

This will also be a chance for our new players to unlock the Friday the 13th Character Page Badge but will also unlock a brand NEW Badge for completing the storyline!

345 days until Just Another Day