Happy Turdraken day everyone! We have a special holiday in-game event for everyone to enjoy. It features the return of OISHII and the last two years worth of Cornycopia content plus a new area! 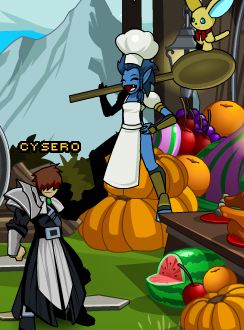 Head north from Oishii and speak to Scott the Pilgrim! He's in charge of the Harvest Parade that is set to march through Swordhaven and Shadowfall but something has gone wrong! 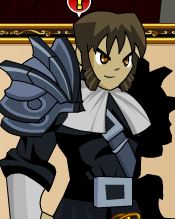 You'll need to battle your way through skeletal turkeys and chaos infectred paraade balloons (patterend after some recognizable figures) to reach the end of this year's event! 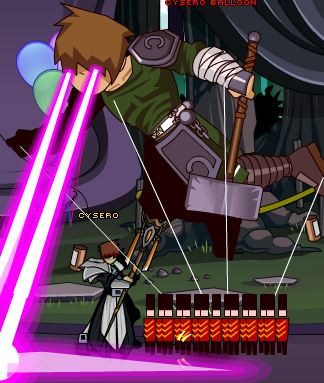 There are tons of items for free players as well as the return of Twig's MEMBER ONLY area, and the Kung Food Fighting achievement shop filled with some seasonal favorites from last year! 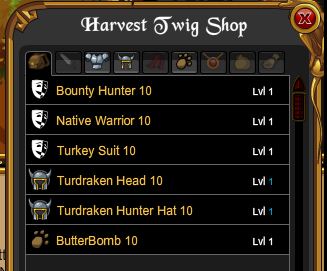 And, because Thanksgiving is a time for going a little overbaord, Scott the Pilgrim has some non-member AND member quests with some amazing new drops, and a special event shop where you can pick up some NEVER BEFORE SEEN seasonal rares for everyone! 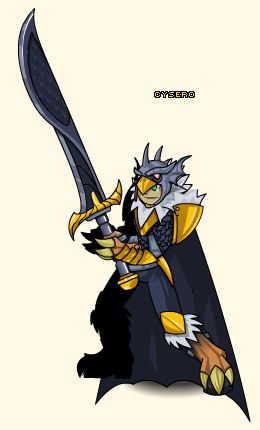 We are introducing THREE new armors, ONE new helm, ONE new cloak, SEVEN new weapons and FOUR new pets this year! A Warning to members! When you complete Scott's last quest this year, you will get to choose ONLY ONE of the pets, so be sure to pick your favorite! There is no going back!

If you have a Twitter, Facebook or Myspace account then you probably were given a Harvest Scythe by a friend.If you are a member, you may now UPGRADE that tot the GOLDEN HARVEST SCYTHE for FREE By taking to either Oishii or Scott the Pilgrim and hitting their Harvest Scythe Button!

It is the busiest shopping day of the year. Black Friday (so called because it is the best sales day of the retail year, which keeps a lot of stores "in the black") happens in the U.S every year on the day following Thanksgiving. You will see crazy Half-Off signs everywhere.... and if you log into AQWorlds, you will ALSO see one in Battleon in the form of BELEEN! 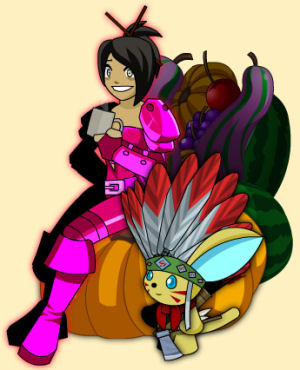 Beleen will be offering you most of the same great Black (sigh...AND pink) seasonal silly rares as last year with a few exceptions. The Pretty-In-Pink DOOMknight has gone perma-rare and will not be offered again. You will also notice a few additions to the shop like the Black Ninja armor (why didn't we have one of those already?) ... and the PINK Ninja Armor... for some reason.

We will keep the shop up for a week so if you're out fighting for your life in the rush of mad shoppers you won't have to miss out!

Speaking of missing out, by popular request we are extending the availability of the super-weird Toilet set for another week. I made the thing for a laugh on World Toilet Day, but suddently I can't open my inbox without a tide of e-mail begging to extend the time to grab it. So... ok. 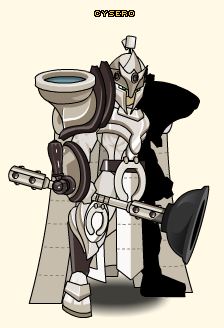 This set is for anyone who can get their hands on it. All you need is a little luck then go visit Ballyhoo in Battleon and watch her ads. As soon as the ad ends you will get some gold, maybe a few free AdventureCoins and you might even get one of the four pieces of the Toilet set.

This Friday, the Phearless will be hoisting anchor and leaving Battleon! 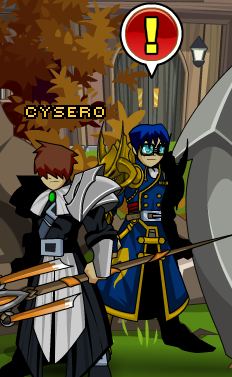 You'll still be able to /join airship to get the drops and we will be adding it as a permenant part of the game when we continue the Skyguard storyline, but Captain Stratos' AC SHOP will be leaving forever! If you want to grab some of the guarenteed rares from his shop, make sure you get them before Friday. Once the AC shop is gone, those items will never be seen again!

...Except being carried or worn by people who got them.

Don't forget that you can be one of five winners in the BattleOn Holiday Sweepstakes! All you need to to is starts a Battleon Master Account, and you can improve your chances by linking your BattleOn Game Accounts to your Master Account!

A Time For Giving Thanks

Thanksgiving is a day for slowing down, looking around and being thankful for all that you've got. Maybe it's family for you, like it is for many of us here at BattleOn Games. Maybe it's having some of the greatest friends in the world, like me. Maybe it's as simple as having enough to eat and being healthy.

Whatever you are giving thanks for, we want to say THANK YOU for playing these games. It seems like we say that a LOT but also, not nearly often enough. We try and stay as close to you (the players) as we can and listen to you when you tell us what we're doing right and what wwe're doing wrong. We also try, whenever we can, to give you all that you ask for and surprise you with a little more.

No matter what you think of us, know that we appreciate every single one of you. It doesn't matter if you're a free player who has just joined the game or a long-time supporter who helped make it possible for us to donate to Child's Play this year and years before. We're glad that you decide to have fun playing with us on AQ Worlds.

Thank You and Happy Holidays!