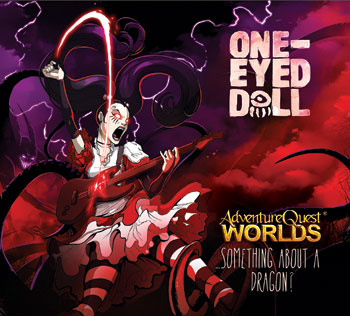 It's TIME! We are too excited to keep this to ourselves so we are releasing a pre-event version of the Committed Asylum Map where you will be able to see the brand new video for One-Eyed Doll's song Committed! 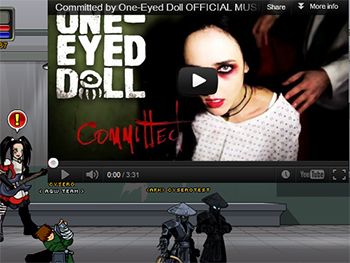 We have also opened the Event Rare Shop full of AC items that will go rare and the new Mogloween 2012 Seasonal Shop with lots of taggged items that you can only buy during Mogloween! Once we release the FULL event later tonight, you will find a bunch of event drops and be able to unlock an event Merge shop where you can farm for a ton MORE new items! You will also be able to unlock the Committed Character Page Badge when you complete the event.

Something About A Dragon

The One-Eyed Doll CD "Something About a Dragon" is now for sale on HeroMart. This CD was lovingly crafted by the band just for the AE community and features the songs "Mirror, Mirror", "Scorpion Death" and "Girl On Convict Hill" features in tonight's event as well as the songs "Battle On!" and "Pony vs. Pony Theme"!

The CD also comes with the non-member Metal Sneevil pet!

We also have the Mogloween 2012 Shirt as well as the AE 10th Anniversary Shirt for sale. Each of these come with an awesome in-game armor and since these shirts are sure to sell out, they are rares!

We'll let you know when the full event is released a little later on today! Battle On and enjoy the video!