Xeven is an Assassin... of TIME! She's also one of the main villains in our new Throne of Darkness Saga, and if you haven't played through her story yet -- WHAT ARE YOU WAITING FOR?! It's mind-breakingly, time-bendingly awesome, and you can start the adventure when you /join portalmaze! 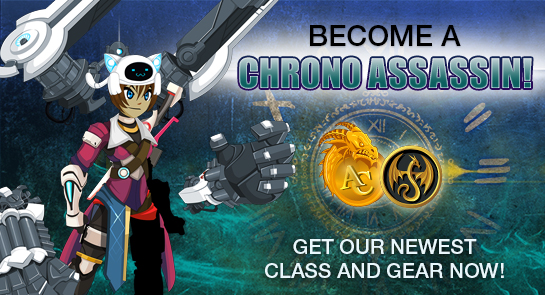 How to get this Class

The member quest is not a daily, so you can farm as much as you want to unlock the class as fast as you want!

Heya guys, it’s Sync. I’d like to thank Arklen for helping me with the Class, especially the animations and skill icons. They’re awesome! Now knowing me, I try to make variants as new and fresh as possible while still being intact with the original Class design. This is a variant of Thief of Hours, with a lot of stacking abilities as you manipulate time as the fight goes on.

Mana Regeneration: Chrono Assassin’s Mana Regen is majority of the evasives, gaining mana when they dodge. (Also restores HP as well)
Stats: This Class is an Evasive so it depends on Dexterity more than any other stat as a whole.

You wield Strike Blades. Manipulating time allows you to attack incredibly fast, but sacrificing speed for power. This is similar to your normal auto attack, except it’s the fasted Auto Attack in the game right now. Attack incredibly fast but you lack power as you do so.

Push time forward with your next strike dealing Light Damage to your opponent. Applies Push Time, increasing your Dodge and Haste by 8% for 12 seconds, stacks to 5. If Reverse Time is in play, Strike Blades will replace it with Temporal Blades, increasing your Damage Output by 20% and applies Pull Time, lowering the opponent's Haste and Dodge by 15% for 12 seconds.

This is your first stacking skill, similar to Steal Seconds, it increases your Haste and Dodge the more you stack it. If Reverse time is in play, as you flow time backwards you apply a debuff that’s the opposite of the buffs you applied.

Relieve time with your next strike dealing Moderate Damage to your opponent. Applies Deadlock to yourself, stacks 4 times. Once max stacked Deadlock will consume itself and apply Reverse Time, granting you a Moderate HoT for 10 seconds. This is VERY similar to Sonic Piledriver and your second stacking skill, also this is your main source of damage on the Class so use this as often as possible. Stacks Deadlock, at max stacks it consumes itself to apply Reverse Time, granting you a Moderate DoT. When this happens, you can apply one of the other skills to apply an additional effect while your Strike Blades turn into Temporal Blades, granting you a huge Damage Output buff for a solid amount of time.

This is similar to Timestream and your third stacking skill,  increasing your Crit Chance and Crit Damage per stack grants more damage over time the more you Crit. If Reverse time is in play, as you flow time backwards you apply a debuff that’s the opposite of the buffs you applied.

You’re a Time Assassin, wouldn’t you be prepared for the Past, Present, and Future? Increases your overall Hit, Crit, and Evasion to better the Class as a whole.

Sever your foes mind in time making them go insane. Causes the target to hit itself when they try to hit you for 6 seconds. Applies Enhance Time, increasing your target’s Damage Resistance by 15%. If Reverse Time is in play, Strike Blades will replace it with Temporal Blades, increasing your Damage Output by 20% and apply Corrupt Time, increasing the damage they take by 15% for 12 seconds.

This is VERY similar to Temporal Insanity, throwing back 100% of the target's damage done on you back at them. Although, this gives them a Damage Resistance for the duration to force players to be prone to use this at random times. When you have Reverse Time in play, that’s when things start to get real. You increase the damage they take WHILE they throw the damage they done back on themselves WHILE you apply Temporal Blades increasing your overall damage.

Rarely, when your hit points drop below 10% and your life is in danger, your health and mana will be restored to full and all damage taken will be significantly reduced for 10 seconds.
This rarely happens but is VERY rewarding when it does. Especially in PvP.

I recommend Thief and Luck enchants for this Class. This Class is an Evasive, getting the most out is by stacking DEX and LUCK stats to increase its survivability and it’s damage. Note this Class does VERY little Damage, but at a VERY high rate.

Thief: Having the most Dexterity means having the most Hit, Crit and Dodge one can have from a Physical Class, allowing you to be more persistent in your core stats.

Luck: Having Luck in your Build really compliments Revert, increasing your overall Crit Damage even more can be deadly. Even more brutal if Temporal Blades is up.

In Conclusion, Chrono Assassin stacks to win. Start off with Shift to increase your Dodge and Haste to stack faster and live longer. The core of the Class is Relapse, so stack then whenever it’s up. Compared to Thief of Hours, I always believed you stack for a purpose not just for spamming. Every 4 stacks of Relapse, You have to choose what your debuff will be to give the Class variety and give it a higher skill cap. Convert will allow you to increase your overall Damage dealing with Crits if you need more Damage. Hysteria can be a game changer, remember if Reverse Time isn’t up you will give them a Damage Resistance and in PvP, they DON’T have to hit you so use this wisely. Once you figure out the stacking you can create your own combos and master being a Chrono Assassin!

Had fun with this variant. Even though two skills can’t be modified to my liking, it still came out an awesome Class. I want to know your thoughts on the Class. https://twitter.com/Sync_AE. :)