Last week Artix asked you for your craziest ideas ever, for his secret project. We are all absolutely LOVING your terrible ideas (and some really great ones too) and Artix has decided to keep this ball rolling for another week.

If you have no idea what I'm talking about... READ THIS.

We are getting closer to releasing our Chickencow Green T-shirt. To start it will ONLY be released in Cysero Green but if the shirts do really well we might re-release it in other colors like Sepulchure Crimson, Chaos Purple, Got My Eyes Closed Black and Artix Is BLIND Pink. 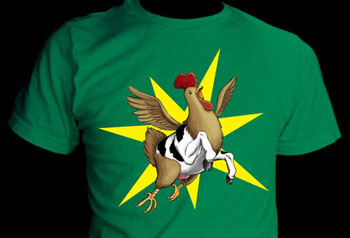 Cluck Cluck Moo to You!

The shirt comes with a BONUS, Non-member pet in AQW and BONUS pet in DragonFable... the Armored Chickencalf! 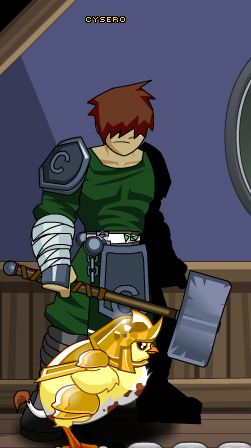 I'm told that the shirt will be $19.95 + Shipping and that we will be shipping to the US, Canada and Australia. We're trying as hard as we can to offer shipping to a lot of other countries too. Setting that up is harder than it looks.. I'll give you guys news on that as soon as I get some.

This week we will be continuing the Giant Tale storyline cause I want to. You'll be making your way to the fabled Smuurvils Village, home to the blue sneevils called Smuurvils. Papa Smuurvil is a world class apothocary and he might have the ingredients to make a Knock-Out Potion strong enough to take out a GIANT!

Dumoose's rework of the Guardian Skills is total win, and will bring the Guardian Class's damage dealing potential up to the amazingly descructive level of DragonLord and Star Lord classes!

Defender will also be coming to ALL THREE verification shops... yet another non-member AQW class. It will have all the current Guardian skills and will continue to be a great tanking class with the ability to yank monster aggro AND be darn-near unkillable with the right party.

Dage The Evil is doing the art for Defender and our coversation actually included this tidbit:

Dage The Evil: I'm thinking over the top
Cysero: Always
Cysero: Or rather, I should say... There is no top to go over.
Dage The Evil: rofl aight dude I think I can put something together :3

I Had Something Else To Write About

But I forgot what it was.

It was this. Some of you have noticed that you're getting banned by Zhoom's auto-banner for 3 days at a time. This is NOT a mistake. We checked the records for everyone who reported this as a bug over the weekend and none of them were.

Just fair warning, this week the 3-Day Warning Bans are a thing of the past... they turn into Permma-bans.

To sum up, script-kiddies... You cheat, you hack, you spam, you scam... you're done with AQW and vice versa. Play the game fair and keep it fun for the other AQW players, thanks.