Save AQWorlds from Chaos Queen Beleen!

Beleen, Artix Entertainment's bubbliest, most positively-pink developer has discovered the sad, abandoned village of Drearia and vows to bring it back to life. But after accidentally stumbling Nulgath the ArchFiend, lord of the Oversoul and former ruler of the Underworld, her powers of randomness and cheer... mutate in the STRANGEST way possible! 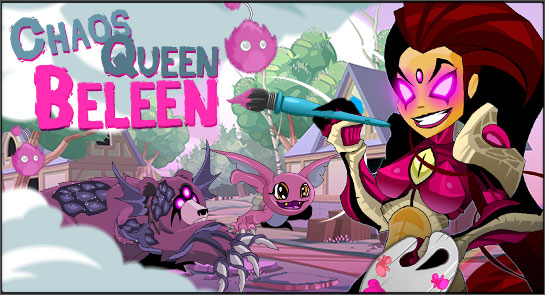 Starting tonight, /join Drearia and battle your way through Beleen's re-envisioning of AQWorlds... cuter, pinker, and with MUCH more Chaos! If you don't want to battle through a pink world, we need YOU to stop her!

Find the rare gear shop in your game menu, with new (unpink) items from Nulgath!* Then head into Beleen's adventure and begin the battle (plus, get some super-sweet monster drops, if you're lucky)! 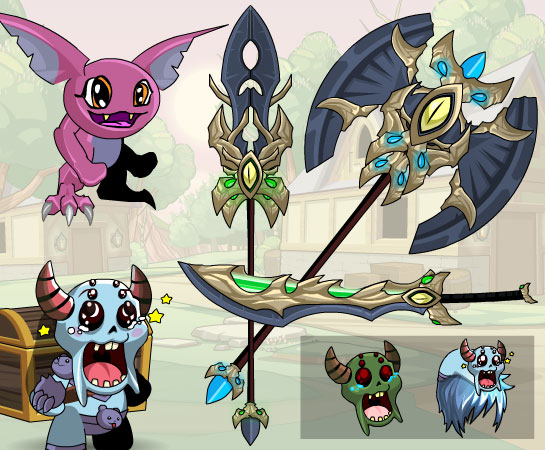 * If you follow my Twitter feed, you know that I am absolutely crazy about the chibi nulgath! I could not stop turning it into more and more gear. Real Fiends go Chibi!

Weeeeee! I just know you are going to love-love-LOVE this special… albeit CRAZY!... release that me and the AQWorlds team have spent 3 weeks developing. It was A LOT of work (requiring A LOT of caffeine), but it was totally worth the long hours and coffee-stained smile because I really wanted to make my Chaos Beleen storyline the most fun and memorable release in the game’s history.

…aaaand not to mention, I kinda wanted MY release to totally PWN Cysero’s and Artix’s events. Teehehhehee >:D

But! In order for that dream to come to fruition, I am going to need your help. I need YOU to join the #BeleenTeam and help spread the word of this weekend's Chaos Queen Beleen event!

Invite all your friends to come play AQ.com tomorrow night with us, and if you happen to know someone who used to play AQWorlds, let them know that I designed this new release and I would love it if they came back and played AQW with me! Woohoo!!

Thanks so much for making my fantasy (…of forcing Artix to wear pink, LOL!) into reality, and I really hope you enjoy playing tomorrow’s Chaos Queen Beleen release alongside me, Artix, Nulgath, and 30000 of our closest friends!

Pink On and Battle On!

So far, we've seen one release from each of our three returning devs - Artix, Cysero, and Beleen! 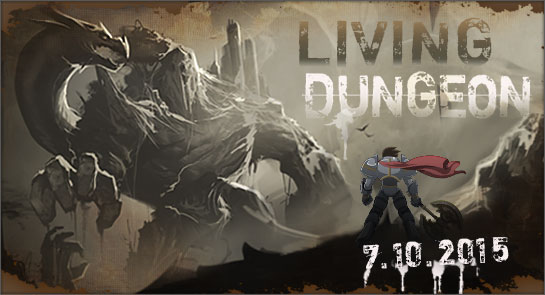 Make sure you've played through all three stories before next week, when Artix re-returns with his Living dungeon release! He, Dage, J6, and the rest of the team have a titan-sized adventure planned for you... next week!