I've known Beleen, AE's Senior Writer, for years, and she is one of the most genuinely positive and kind people I've ever met. If you've seen her tweet even ONCE, you know she LOVES the color pink, and I've come to learn that love isn't just a color, it's a frame of mind and lifestyle. It's <3. This weekend is her birthday; real lfe level up, DING! 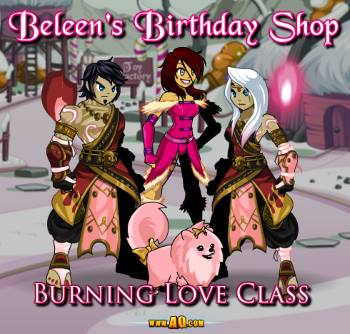 If you haven't seen Beleen open her in-game AQWorlds presents from the team, you can watch it here! But a few more just arrived, and she hasn't seen them yet (/cheer!), but we are going to show them to YOU now!

In addition to the Pink Pomeranian Battle Pet, Chibi Beleen on your Back cape, and Beloon pet, we're alsoreleasing the Burning Love Class for 2000 ACs*, the Pink Eternal Flame of Love, and the Bright Pink Flame capes!

Buying the Class will ALSO unlock an armor version, which will be added to the game once Beleen's birthday shop goes rare for the year.

* The Burning Love Class is based on the Pyromancer Class, and will have the same skills with different names.