Trolls and Horcs fighting together?! Whatever plan the Chaos Lord is plotting is definitely Chaotic, and Drakath is intrigued! 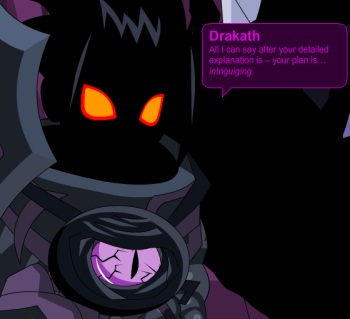 Drakath is intrigued by the Chaos Lord's plan

After all these weeks of being torn apart by suspicion, mayhem, and war, the Trolls and Horcs have joined together to battle the Good/Evil Alliance occupying their home. Can they survive working together for a day and possibly mend the Chaos-induced rift tearing them apart? 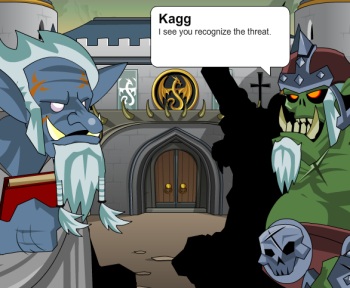 Cooperation is difficult after so much distrust

Heroes, you'll need to battle the Alliance soldiers threatening your Troll and Horc friends and confront the Leaders of the Alliance themselves! Along the way, attempt to locate hidden documents which will give you much information about the Alliance Leader's motivation... IF you can find them!

Rawg and Druuz, warriors to the hilt, are each offering a side quest with sweet rewards. And if you receive a Chaorrupted Vial drop from any of the monsters, you can merge their rewards into tainted, tentacled versions! 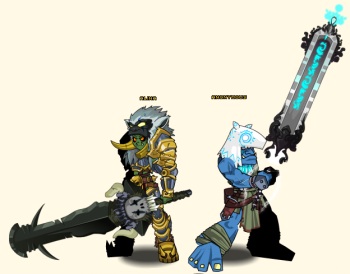 Reputation and AC rewards include:

Are you ready for Annihilation?! The Brutal Annihilator and Helm of Annihilation have been added to the Treasure Chest loot table this week! Made by Dage and ready see you through the bloodiest of battles, this armor is for seriously brutal warriors!

Ooooooh YEAH! Ready to BATTLE ON!

Thank you for supporting AQWorlds, 3rd Upholders and Founders! Without your support, we could not continue to update AQW; you guys make a BIG difference! To show our thanks for either upgrading last month or when AQW first went live, we've awarded your Platinum Starsword (3rd Upholders) and Platinum Armored Platinum Dragon pet (Founders)! 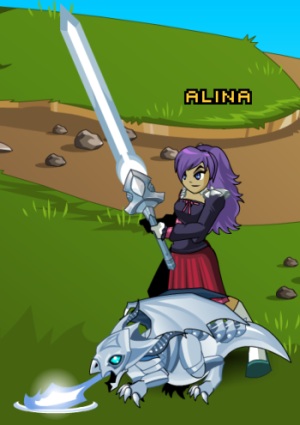 A gift from us to you to say THANKS!

If you've been keeping an eye on our Twitter accounts, then you know that HeroMart has got some EPIC new swag! The BattleOn BattleCard MOD PACKS and the Artix Entertainment Logo shirt are now available for purchase! Get your gear on at HeroMart!

This month is November, and here at Artix Entertainment, that means... DRAGONS! And since THIS year will see 11-11-11, we think you should keep an eye out for something as singular and special as that date is. Get ready to get elemental next week!

Enjoy the release! I'm in Chicago celebrating my sister's wedding, so the AQW team is going to have to cause Chaos without me... at least until next Thursday. Don't fight any enemies I wouldn't! (Which means... BATTLE EVERYTHING!)