On the outermost edge of King Alteon’s kingdom lies a forgotten stretch of land ravaged by heat, winds, and time. Few towns are left inhabited, but enough people remain – and pay allegiance to the King – that the SkyGuard still patrols their skies.

Awake yet inside the Dreamscape, the Dreamweaver walks the streets of Anders’ Loss – the site she has chosen for the coming deception. A ghost-sun shines in the ever-present twilight of this twisted Otherland; in this place, contradictions exist side-by-side, and only the initiated are able to travel there unhindered. 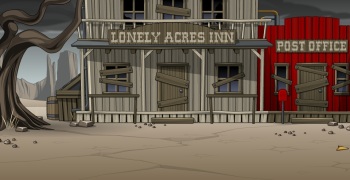 All looks well, and the Dreamweaver smiles cruelly. The next time she sees this place, it will be full day, and she will no longer be in this land of memory-demons and night-terrors, but in the real world. Ready to play her part in a charade starring the Hero. And Stratos. Yes… Stratos. The Master was wise to have selected this course. Everything depends on the Sky-Captain. 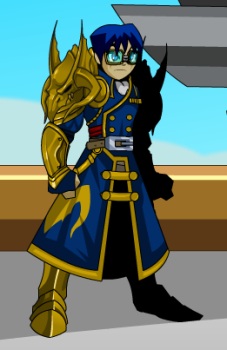 But first, she must draw them to Anders’ Loss. The ambush should go smoothly.  The Sky Pirates she ensorcelled are working well with the Badland Bandits they recruited. She anticipates the SkyGuard’s response, and is confident that the two airships currently docking at the Base will be kept occupied by the Pirates’ ships.

It is imperative that they be drawn into this battle. The Hoverbase MUST be deserted to allow the Master free access to the resources they need so badly. It will work. The plan will proceed. The Master will be successful. And Granny V shall meet with the Hero and Stratos, helpless and ready to reward them for their heroics. Oh yes. All will go well.

IF you survive the DreamWeaver's plans for you, Hero, you'll have a LOT of loot to pick up! This week we're stocking the SkyGuard Rep shop with some crazy-cool new accoutrements for Members, like these electrifying ShockSticks and that jaunty SkyGuard-themed fascinator: 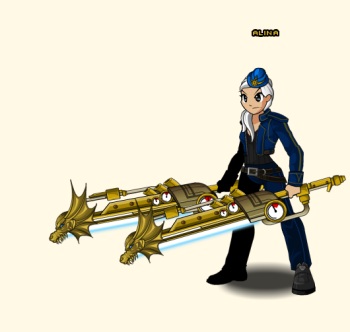 We've also got this (sky) high-class axe for you to wield, and Heroes and Heroines alike will look forward to a set of Aviator goggles accompanied by a snazzy scarf! (Don't worry, Heroes, your helm comes with an aviator cap, NOT the Easy-Breezy Goggle-Girl hairstyle!) These items aren't all, though! We'll have the SkyGuard Helmsman Armor and more coming, too! 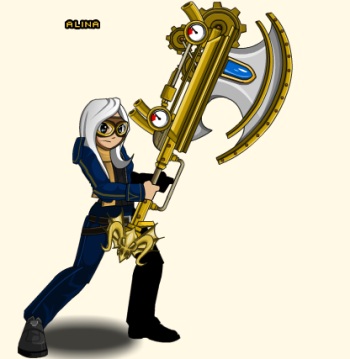 Members will also have a bevy of impressive Player-Suggested booty to buy, because we're adding to THAT shop, as well! Check out some of the goods that Yulgar's having commissioned: 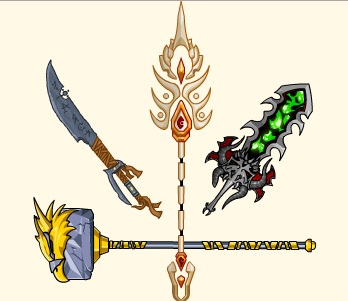 And to top it all off, we're also releasing the 2011 Father's Day shop on Friday! What better way to show your dad you love him than by buying him a set of virtual golf clubs? But if golfing is too active a sport for your big bad dad, we've got a slew of sweet accessories that'll let him relax - Ol' Fishing Garb, a nice sheet of Newsparchment, or the Gravity Defying Coffee Mug!

There's something for everyone in the Father's Day shop because everyone we know has a Father or a dad-like figure in their lives, and it's always nice to recognize those who mean a lot to you!

We've got a lot of work left to do before Friday, so I'm going to get back to writing (and explaining to Samba just what a "Dravir" is and why it wants to be a bandit...)

See you Friday! (Or sooner if you're on Twitter!)