Flash Player is Going Away... But We've Got You Covered

The grim reaper is coming for Flash... but that's OK, we future proofed our web-based games! Using the Artix Games Launcher removes the need for a browser or the Flash Plugin. 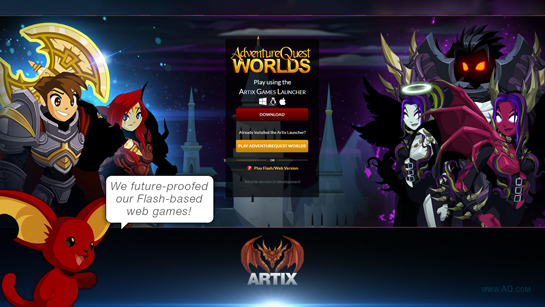 And starting today, you'll see a new log in screen for each of our regularly-updated Flash games encouraging you to download and log in and play using the Artix Launcher.*

Plus, we've added a character page badge for all of the AdventureQuest Worlds heroes who've downloaded and are using the Artix Games Launcher... as an extra reward for embracing the future!

You can download the Artix Games Launcher on your PC or Mac computer. The Launcher should also work for most newer Linux distros (64-bit) that have Applemage support such as Ubuntu 18.04+, Manjaro and Pop_OS.

Do you need an older version of the Launcher?  Find it Here
Having trouble with the launcher? Game Launcher Support

"Considering how Flash Player is going away soon, there is no better way to play some of the best flash games on the internet than with Artix Game Launcher." - rockybytes.com

"I am so ready for this Launcher Transition. I've already uninstalled Flash Player. And I've for long played AQWorlds and DragonFable on launcher anyways. This just ensures that we get to play our beloved childhood memories for YEARS to come!" - AQW player, Valoth Dissidia

Is the Artix Games Launcher safe?
You bet! All downloads from any official Artix Entertainment game or website are safe and will not give your computer or network viruses.

How do I run the Launcher on Linux?
If you are running Linux, you may have to make the .applmage executable depending on what file manager you are using. In most cases, simply right click -> properties -> permissions -> check allow executing or in the terminal: chmod +x ./Artix_Games_Launcher-x86_64.AppImage.

What about other Artix Games?
Our first cross platform game is AdventureQuest 3D. This game can be played on iOS/Android devices and via Steam.

HeroSmash will not be playable via the Artix Games Launcher. We will leave the game online and available for heroes with existing accounts for as long as the internet allows.

Will you convert your Flash Games to Mobile?
We would like to convert all our most popular older Flash games to mobile or create new versions of them. The Omni team is currently working on converting AdventureQuest Worlds to its next version, AQW Mobile, which will be playable on mobile devices, your computer, and maybe more!

* If you are a fan of the classic log in screens, never fear. We've included a link to them, and will leave them up as long as we are able... or until the internet forces us to change plans.