They changed the food Pyramid!?

Recently, I learned that schools changed the Food Pyramid to something called "MyPlate". Which is... some sort of spherical pie chart of edible goodness. This has serious ramifications to all of us here at Artix Entertainment who have been following the official A.E. Food Pyramid. 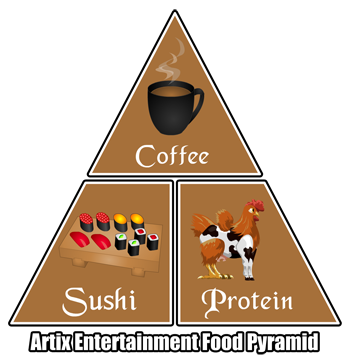 So... it is time for a change! But I need your help. What should we put into the "MyAePlate?" For starters, coffee needs to be replaced with Green Tea (Coffee is so 2007. Green Tea is the fuel of creative geniuses now!) Feel free to post drawings... they should be circular. See you on the forums, Twitter and Facy-facebook. Battle on!

We are just 2.5 weeks away from the DragonCon Convention in Atlanta, Georgia. The A.E. team will be there in full force. A great chance to meet the team in person! We are throwing a pizza party in our suite (at the top of of Marriot) at 8pm... and if you are going to DragonCon, you are invited! Then... we are kicking off DragonCon's gaming track on Friday at 2:30pm with the "AQWorlds Meet and Greet" (Check us out on the DC MMO page) During the panel we will be making fun of ourselves, showing crazy videos, giving out tons of prizes.... including ONE "still in the package" 2011 Calendar (with a Chronomancer Code).  But this year we are making special arrangements for all of you who cannot attend in person. We are going to attempt to stream our panel live in-game for you. This will be the first year of DragonCon for many of our team... including J6 who will be attending in his J6 cosplay outfit that he put a crazy amount of work into!