Artix is officially a Father-adin O_O

Introducing the newest member of our video gaming community... Ash! ...Aidan! ...maybe Valen? We have not officially chosen his name yet. He was born in the bathroom tub of Castle Krieger at 5:39am on August 14, 2014. (For those of you doing the math- exactly 9 months and 2 weeks after the wedding.) The cute little undead slayer weighs in at 6 pounds 9 ounces and has WAY awesome hair. So. Much. Hair. He is healthy so we suspect all crying is due to his confusion over why he has been in this world several hours but not played any video games yet. I had the honor of catching the baby. Bringing it above water and watching him immediately take his first breath and spring into full life was a moment none of my words can explain. The midwife was amazing and the entire home birth went off without a hitch. Trinni and I are both anxious for the day you get to battle the evil undead alongside this little guy! --and grateful that he is going to be raised with you in his world. 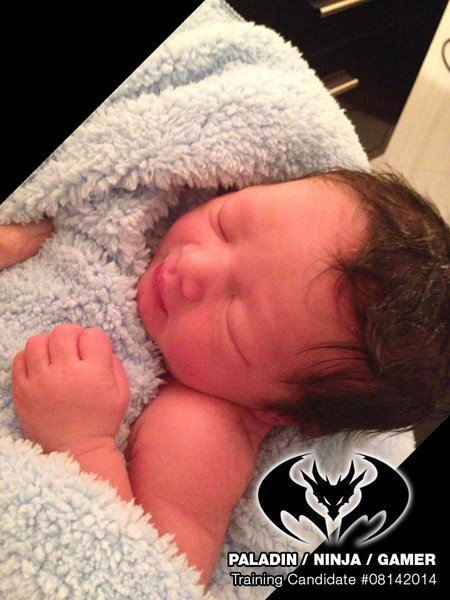 P.S. I was shocked to find out that whole Stork thing was a lie... the baby was actually in Trinni's belly the whole time! ...and here I thought it was just all that ice cream she had been eating during the 9 months since the battle wedding.
P.P.S. Thank you for allowing me to share the most important moment in my life with you.