Tuesday is here! And everyone knows what that means: a brand-new Featured Artist Showcase Shop is coming to Battleon this afternoon!

Every Tuesday, one of the wonderful AQWorlds artists showcases their unique flair and style with a shop full of items that inspire them! We have seen amazing item sets from Vokun, Memet, Hizu, Mido, Nulgath, Jemini, and Dage the Evil. 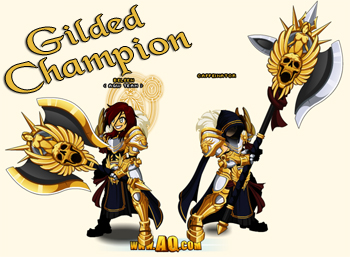 This week, we are showcasing never-before-seen items from our volunteer artist, Aegis! Get your Golden On as you become a Gilded Champion!

Studying both magic and melee, Aegis is a mage knight who calls himself a Paladin… even though he’s never had any official Paladin training. But hey, you can’t really argue with someone who fights for all things good against the forces of evil! You’re a Paladin in my eyes, pal =D 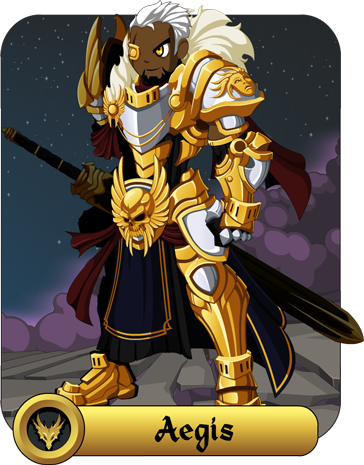 In the real world, Aegis hails from the magical lands of the Philippines. Recently, Aegis exchanged the tropical life for a more mountainous one in the kingdom of Colorado. Aegis has always loved to draw and found most of his inspiration from video games. In 2006, Aegis found Artix Entertainment and became inspired by our signature brand of silliness! =P

Officially joining the team in 2011, Aegis is technically a volunteer artist, but wants to become a bigger part of the AE family. And with all the AMAZING art Aegis pumps out every week, who could blame him?

Head to Battleon now and stock up on Dage the Evil’s OathKeeper Armor Set before Ageis brings gilded glory to the world!