Alongside the weekly release updates and the other backend projects we're working on, Yorumi is making great progress on the server rewrite. He's currently working on porting over the stat system; that is on track to be done by this Friday.

"We're changing a fair bit about how stats in AQWorlds work. The modifications will make more sense both for gameplay and in an RPG sense. More stats (especially the secondary stats) will become useful; you'll want to use more than just LUK enhancements after we're through." 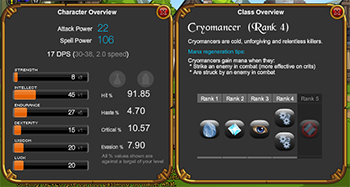 For example, mages will want to have INT and WIS, Warriors will want to focus on STR. Once we reach the PTR live-test (which is still several months away), we'll have a free PTR enhancements shop so you can try out all the different combinations.

Right now, we are less than a month away from the staff-only test of the new combat system. We are still on track for SRV 0.8 (the player live-test PTR) to begin in September.

Phase 1: Porting the existing game over to proprietary server software (that we built ourselves. This is what Oversoul currently runs on).

Phase 2: Updating core game functionality on AQW 2.0. Phase 2 is where we're planning to make the changes you have all been asking for:

We cannot start adding in Phase 2 functionality until after Phase 1 is complete.

That means no rare items would be returning. You - and you alone - would regain access to only the items you had previously purchased. There will need to be restrictions on this so it cannot be abused, and we do not have finalized details on what items would be eligible, what price you would need to pay to buyback the items, or what kind of wait period would be required.

Because this functionality is so far out (we need to finish all of Phase 1 first), we've got plenty of time to plan the best way to meet the goals while addressing many of your concerns. We'll announce more details about this and other Phase 2 functionality additions as we get closer to the release date.