Every time you log into AQWorlds, you've got some goal: meeting up with friends, ranking your newest class, or farming for the Blinding Light of Destiny. The sense of satisfaction when you accomplish that goal is one of the best things about playing AQW! But we want to give you even MORE rewards for playing... and that's where the Achievement Tracker comes in. 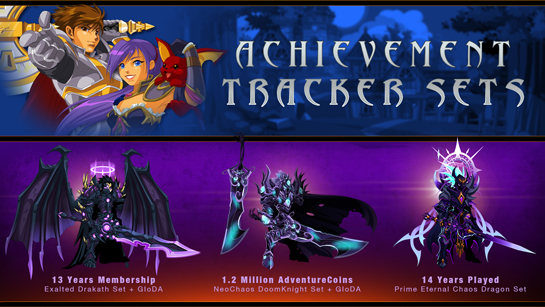 Every achievement pack is a full item set; when you log in with this gear equipped, you'll have an immediate WOW factor.

The Membership and Adventurecoins achievements each come with a pet that contains a quest for your Golden Item of Donated Awesomeness. Follow the instructions on the item to claim your prize!

Some of these rewards may take a while to unlock, but don't worry... they will never leave, so you can keep battling towards your goal!

And the best news: ALL of the progress you've ever made count towards the Achievement Tracker!

Keep track of the main sagas in the 13 Lords of Chaos that you've completed! Grey badges mean you have yet to unlock the shop. Colored badges mean you can head in-game and find the reward shop in your Book of Lore!

Keep track of how old your account is... the longer you've been with us, the more rewards you get! Grey badges mean you have yet to unlock the shop. Colored badges mean you can head in-game and find the reward shop in your Book of Lore!

The heroes who support the game by purchasing memberships and AdventureCoins are the lifeblood of AQWorlds! Without them, we could not keep the servers running or so much of the game available to anyone who wants to sign up and play. To thank them, we have several inventories' full of exclusive gear!

Each of the items in the Loyalty Achievement category come with a bonus, special item animation... or both as our way of saying THANKS!

What counts for the totals?

A "reward" is, by definition, something that must be earned. It's given in return for service, merit, hardship, etc.

Achievement tracker gear is a bonus, an extra bit of "oomph" to make the act of reaching the goals even more awesome!

Remember: none of the achievement tracker rewards go rare. If you can't get the thing you want today, it will still be here tomorrow, next month, and next year!