Get Ready to /Party... Yokai Style!

We have a TON of events happening, because this is the week of OMG all the returning events! So strap on your lightest gear and get ready to MOVE! 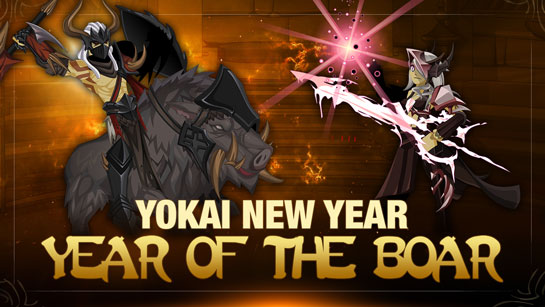 Yokai Isle blends many cultural elements from China, Japan, and other Asian countries to create one of the most popular zones in-game. So every year, we celebrate Yokai New Year in Akiba. This year is the Year of the Boar (and the colors brown, yellow, and grey) in the Yokai Calendar.

Talk to Empres Ai no Miko and battle the Honorable Boar monster in the Empress' throne room. Take him on to show your respect for the boar's determination and courage.

The boss monsters has a chance to drop:

Pisces and the class balance team are back at it -- updating classes you love to keep them fun and handy in battle! We changed four classes this week:

The classes that received the most significant changes were Mystic and Arcane Dark Caster, while DoomKnight and Artifact Hunter received smaller changes. Because of this, DoomKnight and Artifact Hunter may be revisited later in February based on your feedback-- so hop on social media or on Discord and let us know what you think about these classes!

The biggest change you guys wanted with these was a decrease in the time required to build up momentum. Now you won’t need to reach 100 stacks of your first skill before seeing high DoT numbers!

The significant cooldown reduction and haste boosting effect of Arcane Overwhelming means your damage will now be consistently higher IF you can manage your skills and timing well.

After a thorough review and reading your feedback, we saw DoomKnight would most benefit from increased mana regeneration opportunities.

But that is not all we've got in the works! Later this month, the class crew will look at...

And just as a reminder: the classes changed in February were directly influenced by YOUR feedback! If you want to see something change, hop on Twitter, Facebook or the forums and let us know!

Log in tomorrow as our GroundHorc's Day quest and gear return. Then come back this Sunday during the SuperBowl Half-time show as we re-open the /punt map and the LoreBowl Gear Shop featuring the Loyalists and the Satyrs!

Join us for an all-new story adventure!  Zhu, the boar spirit we must honor and celebrate, has been enchanted, and lays unconscious. He is still alive, but our mystics say the only way to revive him is to enter his dreams and destroy whatever has trapped him.