Birthday Cake for All

January: Month of Many Birthdays! 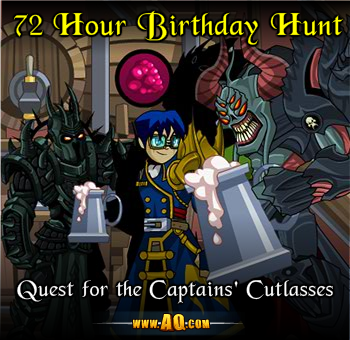 Too much raspberry smoothie, too.

It's Captain Stratos' birthday today! /Join Airship and take down the Skypirate Draconians for a chance to get Captain Stratos' favorite blade, the Stratospheric Tachi 2014, and find his birthday shop (with all the new and returning gear) in your Game Menu until January 31st!

Yarrrrr! Today be the piratiest day of the year, so grab your mugs of moglinberry juice, hoist your cutlasses, and /join pirates to quest for the Pierate Birthday Cutlass +5 (gives more gold and damage against Elementals! Some boneheaded scallywag has stolen Rhubarb's birthday present for you, and you need to get it back!

Find Nulgath's Challenge Pet in his Birthday shop now! Accept the Tenacity Challenge Quest to earn Bloodgem of the Archfiend! Merge 5 of these in Nulgath's Underworld Merge Shop into a weapon to unlock the second daily quest, which has a boatload of random gear!*

Nulgath's birthday gear will be in your Game Menu** until February 3rd!

/Cheer for All our Other January Birthdays

A little undead parrot told me AQWorlds' favorite Gypsy Goth Pirate musician ALSO has a birthday this month! Happiest of birthdays to Mritha, Head Moderator of AQWorlds General Discussion forum, as well,and to all of our other team members, heroes, robots, and organic lifeforms not otherwise specified with January birthdays/creation dates!

* These quests are daily quests. This is one way we can combat botting without making quests overly difficult.

** PS: The pets in the Meme Moglin shop have moved into Aria's petshop!