Plasma Pyro: Too Hot For This World

Yep. It should. It's an awesome set! Each piece of it is made of beautifully rendered flames that flicker and dance across your character's body. And, apparently, cause a lot of lag for a significant portion of our players. Wouldn't be a big deal if this was a rarely-seen set, but when an armor looks this good, of course everyone is going to want it: 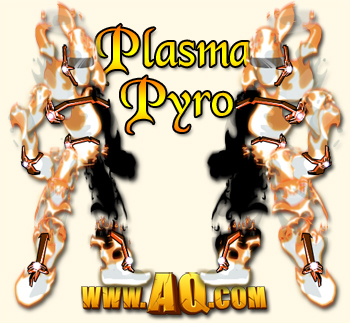 Obviously it's freakin' gorgeous, so we don't want to remove it from the game entirely. And we definitely want to give those of you who might have used a slightly-delayed payment method a chance to get this great set. However, we do need to limit the number of people who have it, for lag-management reasons. So the set will remain in game until Friday, at which point it will go rare.

And on the bright side (heh, bright), all of you Arklen fans who bought it will be the proud owners of a very limited, very prestigious set. Good compromise?

PS: the Chaos War rare gear leaves this Friday! Don't miss out on some of this great gear. /join chaoswar to battle the Chaorrupted creatures of Lore!