Classic Arcade Game Fans - This One's For You!

Hard. Retro. ...and SUPER HARD! Can you last 10 seconds? Are your thumbs blessed with the the nimbleness of an elf rogue drinking their third pot of coffee? Tell you what. Get over 1,000 points and the entire internet will bow down before you claiming you are the ultimate gaming god of the universe.

Hurl down a wormhole in an 8-bit spaceship… that has a proven track record of exploding… in this retro arcade runner (technically speaking, a space-time continuum flyer). Your only goal is to survive as long as possible. The longer you last, the faster you go, and the higher your score climbs.

Survive breakneck turns as you dash through geometric wormholes that will shatter your spaceship — and hopes of a high score. 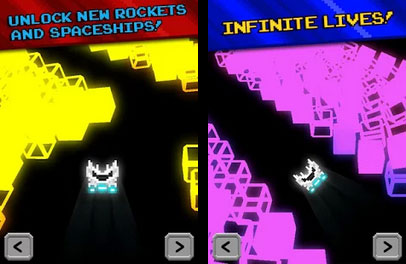 Luckily for you, you have infinite lives (and, apparently, an amazing mechanic), so you can replay the game without hesitation or remorse for the rocket you just destroyed seven seconds earlier.

This ridiculously hard twitch game was created as an overnight project by Rolith and the CRIT Team at Artix Entertainment. May you enjoy countless hours of frustratingly, addictively-beautiful space-travel with VelocityAE!

So one night, Rolith started building something he was really passionate about (retro arcade runners), and 24 hours later… VelocityAE was born.

“Have you told Artix about your game, Rolith?” Cysero asked. “Um, No...” whispered Rolith, “Don’t tell Artix about Velocity yet.

Finally Rolith approached Artix and said, “I know you got a ton of games coming out this summer, but what would you say if I had one ready to go…. right now?”

A skeptically-curious Artix was given Rolith’s iPhone and he started playing. He died 3 seconds later. “Hard. Retro. ...and SUPER HARD!” exclaimed Artix as he spent the next 17 minutes replaying the game over and over again, trying to beat his high score. He didn’t last longer than 10 seconds. “I love this! How long until we can release it for the players”

Rolith smirked. Artix went o_O, leaned in and asked, “Did you, uh… already submit it?” Rolith was taken aback. “Should I have waited?” “No, no…. this is great!” Artix reaffirmed. “At least you did not use your spare time to making another game about Ponies! Let it go live secretly, we can make fixes and then tell the whole world about this!"

If you think you can beat my high score, or Cysero's, or Rolith's - show us!  VelocityAE is up on the iTunes App Store and Google Play store right now. 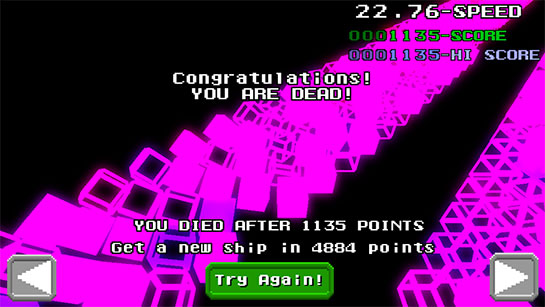 Please show Rolith and his hard work some love by giving VelocityAE 5-stars and help us spread the word, then tweet screenshots of your runs to Rolith, Artix, Korin or Cysero!