Special 1-day only Event in Battleon!

Happy Groundhog Day! One this day every year, Philip, the weather predicting groundhog pops his head out of his hole and peers around. If he comes out to play, then spring is here! If he sees his shadow and vanishes back into his warm cozy burrow, then we know that we are in for SIX MORE WEEKS of winter! 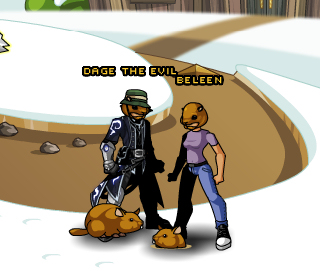 Well… considering how Battleon is still covered in a blanket of snow… things don’t look too promising for Phil. But things aren’t on the up-and-up anyway for that poor groundhog because General Porkon in the Horc Fort has kidnapped him! 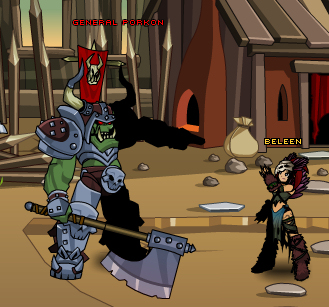 And don’t forget that the clock is ticking on other things: the Ctrl+Alt+Del Event! If you haven’t already gotten your mitts on the CAD Rare items and helped recover the Winter-een-mas Crown… then what are you doing reading this? Ahahah! The Event and the Rare items will only be available for a bit longer so make sure you get the goodies while you still can!

The last day of January has been the busiest day of the year for me!

You’re probably saying to yourself, “Monday? A busy day? It’s only the start of the week…? And Beleen is freaking out over what exactly?” Are ya thinkin’ something like that? Am I close?

Regardless if I’ve hit the nail on the helm or I’m waaaaay off… I’m going to explain why I’m so busy while revealing everything else that has happened today and will happen this upcoming week! So sit back, relax, equip some anti-pink protective goggles, and enjoy all the bulleted points I’m about to make =D

On Friday, the MAX number of obtainable Inventory Slots in your Backpack went to 100, and MAX Bank Slots went all the way up to 250 (and you can still store an unlimited amount of AC items in your bank)!

Two new achievements were *supposed* to be added to the Book of Lore on Friday... but something went horribly wrong and the ‘Spaced Out,’ ‘Maxed Out,’ and ‘Superhuman Vault’ badges weren’t working properly.

BUT NOW THEY WORK! Yay!

Thanks to the hard work from Yorumi, Llussion, and Minimal, and the tears from yours truly, these achievements now work and show up in your Book of Lore. The Spaced Out badge appears when you have 75 slots in your Inventory, Maxed Out is awarded for getting all 100 Inventory Spaces, and Superhuman Vault appears when getting all 250 bank slots.

Have you played through the entire CAD Event? Helped Ethan retrieve his Winter-een-mas Crown? And now you wanna farm Battle Zeke buuuut that Cutscene keeps playing and kicks you back to GameHaven?

Well that’s been fixed, too! After you defeat Battle Zeke and complete all the quests in GameHaven, the Warehouse, and Arcadion, you will never have to watch that Cutscene ever again after you pwn Battle Zeke. So happy farming—he has 6 wicked drops if you’re lucky enough!

Also, the Character Page Achievement for the Ctrl+Alt+Del event is still not working. But fear not! Zhoom the fancy-pants programmer says that these achievements *should* show up sometime tomorrow. Once they are up and working properly, we will announce it on the Homepage, on these Design Notes, and on our Twitters =D!

Holy groundhogs! It’s ALMOST February 2nd! Do you know what that means? …uh yeah, I guess my little subtitle thing up there gave it away. It’s Groundhog’s Day!

On this day every year, Philip the weather predicting groundhog pops his head out of his hole and peers around. If he comes out to play, then spring is here! If he sees his shadow and vanishes back into his warm, cozy burrow, then we know that we are in for SIX MORE WEEKS of winter!

What will Philip predict this year? Log in this Wednesday for a mid-week Groundhogs’ Day release!

Chinese New Year—Year of the Rabbit

February 3rd marks the Chinese New Year—the Year of the Rabbit! So to celebrate this 15-day long festival, Akiba on Yokai Island is currently being decorated with lights, lanterns, and fireworks, and will be fully ready by Friday night's release!

There will be bunches of new quests and even more new items to choose from to get you in the spirit of things! Princess Miko is EVEN getting a makeover for this special occasion. She’s ganna look sooooooo pretty! Hehehhe!

Last year for Chinese New Year, we offered a very special non-member pet for AdventureCoins. And this year… we’re doing the same thing! Can you guess what it’ll be?

It’s only fair to keep the same pricing as last year, so this year’s non-member AC pet will be selling for only 300 AdventureCoins! 300 ACs is fairly easy to get, using the AExtras page (make sure you have a REAL but SECONDARY e-mail set up to avoid possible spam!) and even the basic 3 month membership comes with 1000 ACs standard =D

SuperBowl Sunday… on a Friday

ARE YOU SERIOUS?! Three events in one week? This is MADNESS!

No actually… this is AQWorlds. And we do these kind of things all the time! And this Sunday is Super Bowl XLV! So, naturally, Battleon is celebrating this too in the only way we know how—with pigskin weapons, deadly pom-pom chakras, giant foam fingers, moglin referees, protective headgear, football armors, and cheerleader costumes.

/Cheer your favorite team to victory while showing your Super Bowl spirit!

They don’t call Dage “the Evil” for nothing! Awhile ago, in the Black Market Shop (which has currently vanished… and no one knows if the Vendor will come back or not…) had a pair of totally awesome weapons called the Reavers of Amenti.

Dage the Evil mistakenly said on his Twitter that the Reavers of Amenti would be a requirement for a future item in his Merge Shop. BAD DAGE, BAD! No one can make such promises, and last week when his “Zealith Reavers” were added to his secret shop secretly hidden in a secret place somewhere in Lore, the Zealith Reavers DID NOT require the Reavers of Amenti as a turn-in.

We have gotten complaints that some players bought the Reavers of Amenti just for Dage’s weapon. We care about each and every one of you, and we want to make everyone happy! So to make amends, we have made the Reavers of Amenti permanent Rares! Congratz to everyone who has them! That Black Market dealer never knew if his items were ganna go Rare anyway...

But wait, there’s more! If you don’t like the Reavers of Amenti because you wanted Dage’s Zealith Reavers instead, feel free to sell 'em!

The Zealith Reavers are still in Dage’s secret Merge Shop and can be obtained only by completing his ridiculous quests and having some serious luck to get the necessary item turn-ins.

Remember folks, AQWorlds is a game made FOR YOU! Without your support, none of this would be possible. THANK YOU for making all of this possible, and never be afraid to let us know how we can make this MMO the best one out there =D

You guys have been great! And you have survived yet another one of my ramblings. Hehehhee! It’s only Monday, and it’s been the craziest Monday yet, but this hectic day promises a glorious week ahead!