We Are Not Ignoring You.

We're Not Ignoring You (unless you're just looking for attention)!

Artix Entertainment tries to set it self apart from other game companies in a lot of ways but one of the most important is how much we interact with you guys. Any of you who follow my Twitter or like our AQW Facebook Fan Page know this to be true.

We love talking to you and even when we don't love what we hear, we love that you care enough to tell us what you don't like and we try and fix it. Unfortunately, we are not always logged in to Twitter (we do sleep on occasion) and when we are, we all have a LOT of people talking to us (at this time I have 31,035 Twitter followers and Artix has nearly 47,000!) so If we don't reply to you it's probably because we either missed your Tweet or because we can't reply to every single Tweet.

Please try and understand that there is no way that we can answer every tweet, much less meet up with every single person who asks to meet us in-game. We would never have time for anything else.

Another thing to mention is that it is mostly the Devs who are on Twitter. Devs (or Game Developers) are the people who spend all week building each new release for you to play, and fixing the bugs that you have reported on the BUG FORUMS. We also have a lot of other jobs dealing with game development and community outreach. All that stuff takes up the entire week (which is why some releases come to you a little later than others) and our jobs don't leave time for much else. In the rare cases when we DO find ourselves with extra time, we make a Mid-Week release or work ahead on new functionality!

So you can see that we Developers keep pretty busy with our own stuff. That's why we have Moderators to help you and protect you in-game and Player Support to help you outside the game with account and payment issues.

Nythera, Zazul, Memet, Neveya & Lady Tomo make up the Player Support team. Their primary job is taking care of you and your account issues. They do a fantastic job and are often overlooked for all the effort that they put into making AE function. 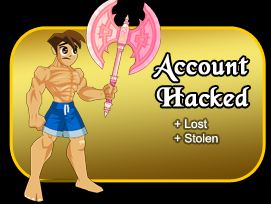 These are the brave and tireless people who read all of your HELP MAIL so you should always GO HERE if you've been hacked or find yourself with a payment issue.

The Player Support team receives THOUSANDS of e-mails EVERY DAY and they read every single one of them, but with so much to do, they can get a little behind sometimes and can't reply to you instantly so if you have a problem, please be patient.

Reens, Stratos and their team of Moderators handle a lot of in-game issues. Everytime someone is using foul language or trying to scam or trade accounts, it is THESE heroes to quietly step in and take action to try and keep the game as fun as safe as they can, and many of these mods are volunteers. They are giving their own time to sort through reports for no reason other than they really CARE about making AQW a safe and fun place for everyone, but they need YOUR help.

If you see someone that they shouldn't be, click on their portrait and use the REPORT function to bring them to the attention of the Mods! 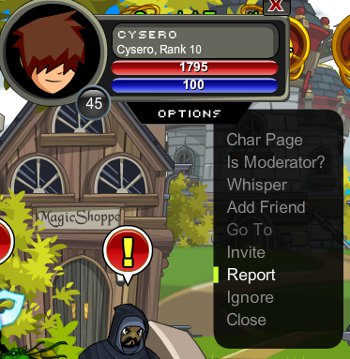 Each team has their hands full. That is why we Dev's can't help you with your account or payment issues when you ask for help over Twitter. It's not because we don't want to, it's because it's not what we do and we literally CAN'T help you in most cases.

Telling the us DEV's over Twitter about your account issues is just about as useful as telling a bowl of soup to fix your broken TV.

It's the same reason that Doctors don't put out fires, Firefighters don't pick up your garbage and Waste Workers don't do open heart surgery. They each have their own job that keeps them quite busy.

If you are having account or payment issues the best thing you can do is head to the HELP PAGE and if you ask us for help over Twitter, that is why we direct you there instead of fixing your account.

Please understand that we really do want to help you (of COURSE we do... we WANT you to play AQW!) and we all do our very best to point you in the right direction to get you back on your feet as quickly as possible. :)

I DON'T WANT TO GET HACKED!

If you don't want to lose your account there are 5 simple things that you should do.

For a long time, everyone with a gold name has been called a Mod (short for Moderator) but there are actually 3 kinds of people walking around with gold names. Mods, Testers, and Devs (short for Developer).

Moderators and Testers are usually loyal fans and supports of the game who are helpful and patient with new players, fun, friendly yet responsible with the other experienced players.

As we need help moderating the growing game we bring on more moderators and we almost always look for players (usually over the age of 18) like the ones i just described above.For the most part being a Mod is a volunteer position, although they do enjoy other rewards like free memberships, free ACs and access to pretty much any item they would like.

You might see Reens (the Lead Mod) and Stratos (the Mod General) running around the game with some of their team muting people who try to spam chat, flood chat or curse or possibly handing out kicks and bans to players who are being rude and trying to ruin other's fun in AQW.

Testers also do exactly what the name implies: they test our releases to make sure we squash as many bugs as possible before sending something out to you guys. They are not in-game moderators and cannot mute/kick/ban any other players.

Devs develop the content for the game. Content can be anything from writing quests and cutscenes to building weapons and armors to crafting the beautiful maps and bacgrounds to programming the game so everything works! Devs build AQW.

As we need help building the game we usually look to our community to find some talented volunteers to help craft items and adventures for you. Most of the Dev positions start as volunteer (Assistant Dev) and if things work out, it may turn into a paid position as a part of the AdventureQuest Worlds team. We try to only take on volunteer developers who are 18 or older. RARELY an exception will be made, but the chances of that are slim to none.

I'm sure you've seen me, Artix, Alina, Beleen or some of the other Dev's running around.

Dev's have all the same powers as Mods plus they get to create content for the game on a weekly basis. That keeps us very busy so we usually leave the moderation to the very capable Mod team but sometimes when we see someone breaking the rules we are forced do a little moderation on our own.

Although we both have gold names we have very different responsibilities, and the criteria we use to finds Mods is very different from what we look for in potential Devs. Testers usually start out by being a mod or dev on another game. RARELY we will put out a call for new testing help. I think that's only ever happened once before, though.

Now you know the difference but we will all probably just keep calling everyone a Mod. It's eaiser sticking to one name and it's not like you can tell the difference between one gold name or another.