For AQWorlds' 3rd birthday, our musical guests really were gigantic stars, literally! They Might Be Giants battled with you on a trip through time, space, and a giant hamster cage... but the time has come for them to go back to that little birdhouse in their soul, and their gear leaves with them on October 10th, 2012!

AQWorlds in the Google Chrome Store...

And we need your reviews to get our rank up! (Usually you play to rank up your character. This time you're /ranking up AQW!) Head here to review AQWorlds and here to share your thoughts on Bladehaven!

Though the gear was great, all good shops must close their doors. Aranx's birthday shop, the Obrigado shop, and the Cave art shop are leaving Battleon this evening. This is your last chance to get their epic equips before they're gone!

/Equip Art from a Prehistoric Era!

Art separates Man from Beast. Prehistoric humans created stunning works of cave art which were lost to time... until September 12th, 1979, when a cave system was discovered in Lascaux, France by a group of teenage adventurers. (Just like you!) 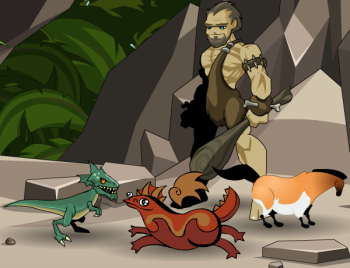 /Join Battleon and talk to Cave Man (name unpronouncable) to celebrate the anniversary of Lascaux's discovery and check out his shop full of gear based on his ancient art... and the Derp-Cave Art pet you begged Beleen to add!

Cave Man's shop leaves Battleon on Monday, September 17th, and his gear will be permanently rare! (But you can still see the REAL art in Lascaux's caves!)