What Time is It?

2012 is the Year of Chaos, and we're starting the year off with a BANG! Literally! This Friday you'll meet Professor Iadoa (Professor Yana, anyone?), a famous Chronomancer who has been missing for decades. He should have stayed gone, though, because now that he's back... it's time for Chaos! 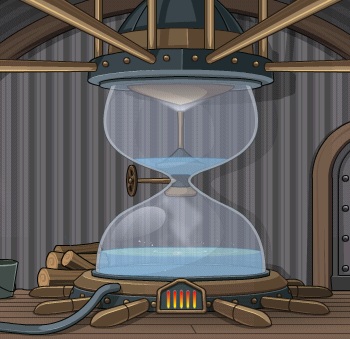 Ok, so maybe it's got a FEW support beams left.
Safety first!

And if he manages to charge his SHUTDOWN* apparatus, you won't have a future as the savior of Lore - because the future will never come! With epic, temporally-relevant seasonal rares (previews later this week) in the shop and as drops, this Friday's event is sure to stop you - and Time?! - in your tracks!

What Time is the Release?

Every Friday, we get dozens (or more!) of people asking "When it the release?!" and we always give the same answer: "As soon as it's ready!" You can see this illustrated on Cysero's Twitter profile, which tells players to expect it at "As Soon As It's Ready O'Clock!"

So to remind us that the clock is always ticking, but that the release will only ever be ready when it's done, the AQW room now proudly displays a clock that says exactly when the deadline is: 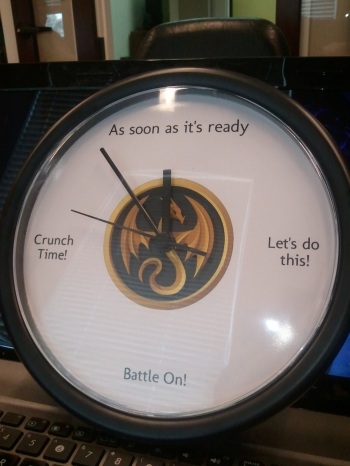 What time is the release, you ask? Now you know! /grin

Almost Time for the LQS!

And you'll want to make sure YOUR real-life clock hasn't stopped, because the last Limited Quanity Shop of 2011 starts this Saturday at 10am EST! (That's 10am server time.) For previews, prices, and quantities of all the rockin' rares coming to the shop, check out the LQS Design Notes post from yesterday!

And it's time for me to be heading out, too! Time to go make chocolate-dipped peanut brittle and wrap presents for Frostval #2, celebrated with family we didn't see over the weekend. Have a good night! And a note to remember for the future (if it comes!): Those who force time are pushed back by time; those who yield to time find time on their side.