Arm they pink-protective eyewear and get ready for a massive spoiler regarding Lore’s newest zone, Player Suggestion Shop update, brand-new NPCs, and the fabled discovery of Bupers Camel.

Yesterday was the first Monday of the first week of the first month of the new year. Artix, Cysero, Safiria, Zhoom, Minimal, and I journeyed into the War Room for a little brainstorming session about this week’s release… and that somehow evolved into a 4 and a half hour discussion regarding the amazing new future for AQWorlds! Omgomgomgomg =D

But let’s not focus on that just yet. There’s still another 361 days left to discuss our new plans. We’ve got a massive NEW release arriving in just a couple of days that I’m sure you wanna get the low-down on. Bring on the spoilers!

This week you will travel to Lore’s seemingly endless desert known as the Sandsea. DragonFable heroes should be familiar with this parched paradise full of palm trees, sand dunes, and desert monsters surrounding a prosperous oasis city. 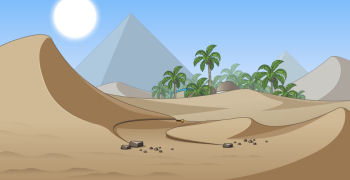 Recently, a very unnatural sandstorm has blown across the Sandsea and revealed that the oasis community was just the center of a much larger town… once devoured by the sands and forgotten by the people. Here you will meet Zhoom the Ranger (and full-time programmer) along with many other oasis inhabitants.

A Bazaar of new NPCs, Shops, Items and Monsters

Much like the thriving cities of Arcangrove and Mythsong Canyon, the oasis town features many NPCs and Item Vendors. Zhoom is the main NPC and Reputation guy offering you all sorts of necessary Sandsea armors, weapons, and various gear. The town also has a Barber with new hairstyles, a House Item Vendor, a Pet Shop owner, and an Innkeeper who sells consumable food! 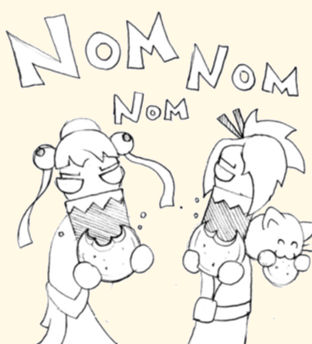 Oh yeah, you heard read correctly. Consumable food. Food and drinks you can actually EAT to give you all sorts of different buffs! These will act just like the equipable Scrolls and Potions… but comes in delicious food form! Mmmmmmmmmmm tasty!

There are also two new baddies making the scene. Since the oasis is just about the only source of fresh water and vegetation in the Sandsea, exploding Cactus Creepers and Bupers Camels have made their way to this desert sanctuary.

Ah yes, the legendary Bupers Camel. No one knows exactly what a Bupers Camel looks like… or even what it is for that matter… but it’s revealing itself this Friday for the first time ever.

Here’s how Bupers Camel came about, quoted from Cysero himself:

“I was showing Warlic the Google voice recognition app. You just say what you want to search for and it googles it for you. I played with it quite a bit and it did really well but Warlic held the phone to his head and said "Dissertations on Bruce Campbell" and what came back was "Dissertations Bupers Camel". I don't know what a Bupers Camel is but I think we're going to have to add it as a monster when we add The Sandsea to AQW.”

Currently, Bupers Camel is a mythical beast that has been used in newbie trickery. Veteran heroes convince new players that catching a Bupers Camel in Greenguard Forest will grant them Mod Status.

Psh, that doesn’t even look like a Mod. At all. Where’s the gold name?

Please note that a Bupers Camels does not look like that. Or wait...maybe it does? I don’t know, I’ve never seen one myself. Gatta love our creative players out there -- thanks Loki Bloodstone!

Who will be the first to capture a screenie of the Bupers Camel in its natural habitat? Prt Sc! Prt Sc!

Because releasing a whole new zone with all the amenities isn’t enough, we are even expanding the Player Suggestion Shop in Yulgar’s Inn. There are already 40+ masterpieces in this shop created by your fellow players… and we will be adding a whole lot more Friday!

You never know if your idea will be put in game… but there is only one way to find out! Head to the forums and submit your awesome weapon, armor, or helm, cape, or pet idea!

A quick reminder! This is the last week to get Quibble’s Items and all of the items from the Big Red Bag and Tinsel’s quests! Quibble and the rest will be leaving town this Friday, January 7th, so make sure you pay them a visit before then.

Give your eyes a rest now. You deserve it =3