Tomorrow... we make our last stand.

Our once beautiful world has been devastated by Sepulchure's zombie apocolypse. We united and fought the zombie horde side by side. But one by one, each town has fallen. Well known friends including Rolith, Alina, Warlic, Valencia, Galanoth and Cysero haven fallen to the green zombifying mists... all hope seems lost. Now, the town of BattleOn is all that remains... three heroes brace themselves as the DoomKnight Sepulchure descends to lead the final assuault... personally. Tomorrow night is the absolute and ultimate finale of DoomWood II & ZOMBIES... remember, this is AQWorlds, anything can happen! 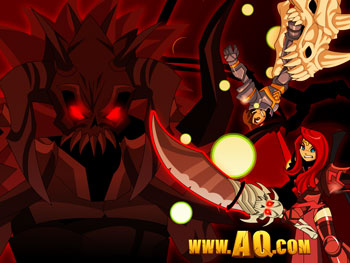 Tomorrow is... THE EPIC BOSS FINALE OF ZOMBIES & DOOMWOOD 2!

4 weeks ago, the DoomWood II: Whispers of the Dark Lord saga began in AdventureQuest Worlds. The original DoomWood told the secret story of Artix and is regarded as one of the game's best storylines. This brand new adventure continues after the "final ending" but is focused on legendary DoomKnight Sepulchure -- and his fiery red-headed daughter, Gravelyn. In my opinion, Gravelyn is one of the most unique and interesting characters we have ever created. A beautiful girl, raised by the undead in a giant flying dragon skeleton castle. She is the daughter of the world's greatest darkness villain and inherhited his throne when he was destroyed at the beginning of the game. Yet... we have never seen her cast a darkness spell or fight. Many villains have claimed she was weak and unfit, and attempted to overthrow her. We might have gone all the way through the game without finding out why... but the unthinkable happened. The cutscene at the end of week 2 re-started the game in the most dangerous "WHAT IF" of all time. It started AdventureQuest Worlds: ZOMBIES! Now, it is all about to come to its unbelivable conclusion.

As written in your AQWorlds Calendars, Friday is everyone's favorite  "fearless undead slaying" battle puppy's birthday. Only during his birthday tomorrow can you obtain an in-game pet version of him via a special Daimyo Birthday shop in town. Oh! There are quests in DoomWood Part 2 to put armor on Daimyo if you get him as a pet. These quests will not be available while his shop is open... but will return once the shop closes. 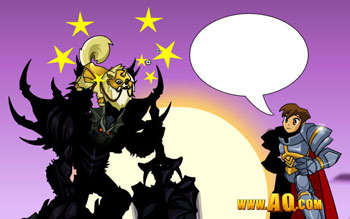 About working on this saga!

I am literally on the edge of my seat waiting to hear your reactions from the BOSS battles and cutscenes tomorrow.   I would like to thank the team for their super hard work... J6 for all of the amazing background art (the elevator and doomcrawler were perfect!), Yorumi for adding the new "monster intro animations," and for helping redesign the war system that has been getting rave reviews, and especially Samba who has been animating all of the killer cutscenes for this release. I would also like to thank all of the players who have been playing through the releases and giving me honest and encouraging feedback. I doubt anyone knows how much your comments influenced what is about to happen. This week's final showdown was hard to write.... it is Gravelyn's story. Something that many of you have seen coming for a long time now, and for everyone else it is going to be jaw-droppingly shocking. She will never be the same "weak little" girl again. I hope you enjoy it. BATTLE ON!

P.S. Help us name the upcoming 3D game and read my other posts at www.Artix.com