Unlock the Lord of the J-Sixth Set

Available every year from May 1st - 31st

May is the month of many things: spring showers, carniverous flowers, and LORE WARS! Our May Seasonal Set features gear from our May the Fourth shop as we celebrate one of the most-beloved fictional universes and pop-culture phenomenons EVER. This month's seasonal gear will outfit you for adventures in space... and beyond: the J-Sixth Lord, Lightning Lich Emperor, and the StarWalker. 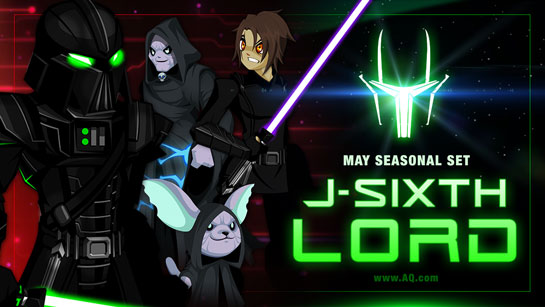 May Sets: May the Fourth Gear

Unlock our May the Fourth (be with you) sets: the Lightning Lich Lord, The StarWalker, and the J-Sixth Lord (with color-custom trim).

The total cost to buy all of the gear individually is 6,000 ACs, so getting all the gear from the pack is a pretty sweet deal (you save 4,000 ACs).

Is this the same as an upgrade bonus?

This set will return EVERY May, so if you can't get it now, you'll have another chance in upcoming years.

You're in luck! Talk to Garek in Battleon. He'll be selling the individual pieces of the set through May 31st.