Before we return to the upcoming DoomWood Saga, I would like to let you in on the behind the scenes story of Miltonius' name and art evolution to Nulgath which is taking place.... *checks sun dial* sometime after his plane lands and he arrives here at the lab. (Or possibly tomorrow. Or the next day. Or the day after.) In game his character will be "evolving from it's larval stage" and become the yet unseen being, Nulgath. You are probably asking: Why? The real answer: I legally gave the name Miltonius back to him as a gift between friends. It really is that simple. But if anyone else asks... just tell them. You were there, when the being called Nulgath hatched. 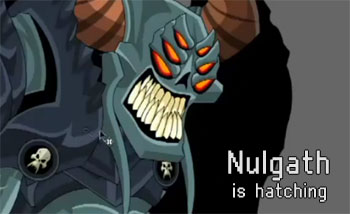 P.S. Prepare to see a lot of his monsters, NPCs and armor in the upcoming DoomWood Saga: Starting this FRIDAY!