Battle to Save the Seraphic Paladins from the Undead Legion!

The Saga of Dage's Betrayl continues this Friday with the "Laken's Rise: Undead Legion Infiltration" story release! Battle to save the Seraphic Paladins from the treason, betrayal, and murder lurking in the shadows of their Fortress! Aid Darkon, commander of the Order, as you seek out spies sent by the Undead Legion, then help purge the Order of Dage’s dark influence. 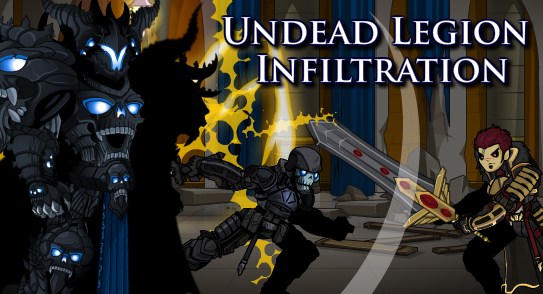 The Order of Seraphic Paladins are charged with keeping Lore safe from Evil... specifically the kind Dage and Nulgath spread thoughout our world! But something is amiss...

Talk to Darkon when you /join Seraph this weekend and answer the call of the Seraphic Paladins as they seek out the spies sent by the Undead Legion! Then use your personal victory tracker to make sure you've purged every member of the Legion... or Dage's dark influence will continue to grow!

Make sure you're up to date!

Battle through Nulgath’s Shifting Planes cavern as Dage the Evil in the final tests to earn his Mark of Mastery and became one of Lore’s most feared Necromancers./Join darkfortress to take down Nulgath’s most loyal minions to prove that you are worthy of leading the Undead Legion… but be wary, because Nulgath the ArchFiend is deadly, and he will exploit any angle in order to stop his apprentice from ascending!

Play AS Dage the Evil and begin the quest for your Mark of Mastery. Once you have that, your time as Nulgath's apprentice will be over! But beware: the Shifting Planes caverns are NOT for the unwary. You never know from one step to another where you'll end up. Oh.

There are only two rules in the Caverns: