A Look Back at Lair

Hey look Throwback DNs are back!  With the chaos of Drakath now behind us and before we start the next saga (have you SEEN that thing above Mount DoomSkull???) it's time to bring back ACW0's write ups on past areas.  Enjoy!

A Fiery Blast from the Past

/Join Lair may be one of AQW’s oldest maps, but that doesn’t mean it hasn’t evolved over the years. From Cysero’s mid-week lair mini release to Galanoth losing his arm, Vasalkar Lair is still worth the occasional check up. Be wary, not all in Lair is a piece of cake, this map’s newest additions sure pack a punch.

Back Case of Helmet Hair

Galanoth is no typical DragonSlayer, his entire life revolves around the act. Whether the dragon is good, bad, or a legendary Time Keeper, if you can call it a dragon, it’s going down. Don’t judge Galanoth though, he has a right to be angry. After losing both his parents to a rogue dragon attack as a mere child, he spent his life avenging his parents. Hopefully with a little help from a hero, he can make the best choices when defending Lore. 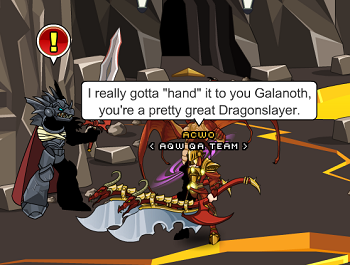 Only those that prove their mastery of dragon massacring, are worthy of holding the title of DragonSlayer. If you can finish Galanoth’s requests and defeat what lair has to throw at you, then mastering this class will be of little challenge. As a heavy melee class, becoming a DragonSlayer is all about about beating up dragonborn. Equip this class and you will be slicing and dicing the Red Dragon in no time. 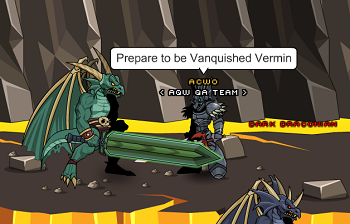 Is slaying the fabled Red Dragon once and for all truly merited? Lair’s mid-week release update puts your moral compass to the test. After defeating their mother, a nest of dragon eggs has been left unguarded. Are you a Dragonhunter like Duncan, and strive to vanquish this bloodline eggshell by eggshell? Or do you see the errors in egg eradication like Ferzana, and save baby dragons for the next generation. Either way, once chosen, your decision and possible quest rewards are final. Can these baby dragons walk the narrow path of good or is it necessary to destroy this evil in the womb? 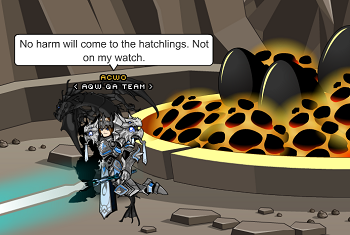 Even when Galanoth is away, Vasalkar Lair needs a protector to keep the dragons at bay. Back during the Golden Onslaught, Galanoth’s mysterious disappearance left the mighty DragonLord Bob defending Lair in his place. While Bob’s true past is unknown, it is believed he was one of the first DragonSlayers in existence. Staying under the radar, Bob rarely helps in the same capacity for long. Seemingly never aging, Bob has seen the beginning of Dragon slaying and will most likely live to the end of it. Who is he? Will he ever return? Just how did he get his name? Bob leaves more questions asked than can be answered. 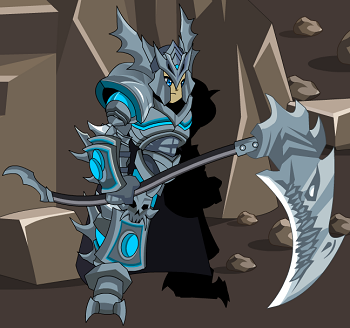 Some heros think they need fancy quests or giant Mana Golems to farm gold, but since AQW’s early days Vasalkar Lair has allowed players of any level to earn a quick buck. Draconian wings and swords yield a hearty price in markets beyond, and every monster in Lair has some form of loot for you to claim. However, all other prizes fall flat when compared to the Red Dragon’s loot horde. Farming this dragon is worth the perils, as many a ruler or fiend would give an arm and a leg for its gear.

Sora here again, fun fact about me, the Dragon Wings dropped by Vasalkar started my wing collecting obsession, I was lucky enough to get them as a drop when I was a free player and I still have them. 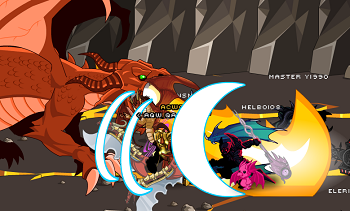 A Writer on the Run

With the final battle against Drakath finally over, there had been little time to look back at the past for throwbacks, especially since all of Lore's future was at stake! The past must be examined, so not to commit the same mistakes. As always, please comment on the forums or tweet me @ACWOAE with any feedback or future throwback suggestions!