Grimskull's 1st dungeon, The Endless Pit of Doom, is being pushed back one week due to the unsightly massacre of the entire dungeon creation crew this morning. Eye witness reports confirm that traps were triggered in room #5, affectionately known as "The evilist room ever" resulting in the activation of the spiked ceiling, razor saws, lemon flavored acid juice and a giant pit trap. The worker minions who survived were hunted down by Binky the Magical Man Eating Unicorn who is now reported to be on the loose. 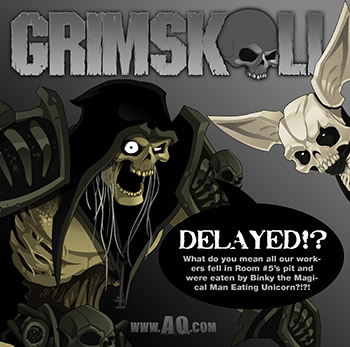 The full dungeon will be released NEXT Friday... so this week, a band of overly agressive heroes intend to battle one of the dungeon's escaped surprise monsters, Binky the Magical Man Eating Unicorn. He is a level 50 challenge fight requiring a skilled and coordinated group to defeat. Rumor has it Binky aborbs magic from the air allowing him to emulate the skill of ANY BOSS MONSTER in the world. Yes... you heard me right. Binky can potentially do the special moves of any boss monster (past or future) in the game. Original intended by Grimskull to be a surprise, Members will get first crack at this magical beast. The lucky few who can defeat him will obtain his Unihorn -- an indestructable object that possesses the power to break apart the worlds most powerful weapon. 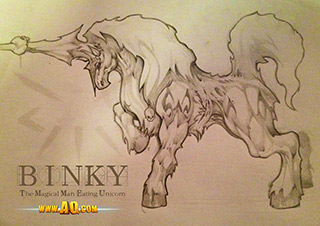 Loremaster Maya, who is located in the town of Battleon's library will have new quests for you.

Artix's battleaxe is known as the Blinding Light of Destiny. It is a powerful force of good, powered by millions of spirit orbs, it is the ultimate weapon against the undead. Not long ago, the Blinding Light of Destiny was shattered and destroyed in the epic battle against Vordred, the Paladinslayer. Thought to be lost forever, Artix and the heroes ventured to forge a new Battleaxe. However, what remained of the previous Battleaxe had been reconstructed by wicked hands. Those who have set eyes upon it call it the "Grimblight of Destiny". It is an evil weapon that does 5% BONUS DAMAGE against pretty much every type of creature EXCEPT undead, and grants the user a rep bonus. If you click on it, it unleashes an evil laugh... and may try to kill other AFK players in the room. Grimskull's assistant, Mort, is reported to be selling it in town this Friday for an unspeakably high number of ACs in order to raise funds to hire new (and less clumsy) dungeon workers.