This weekend, log in and journey deep into the frozen heart of the northlands. The Ultimate Lich King's newest minion - the Lich Lord - awaits, but before he can join the ranks of the Undead Legion, he needs to prove himself in battle. Many have fallen to his dark magic already. Will YOU survive? 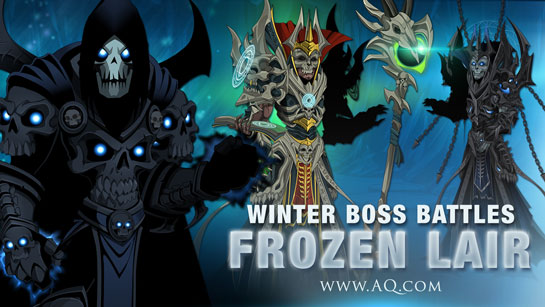 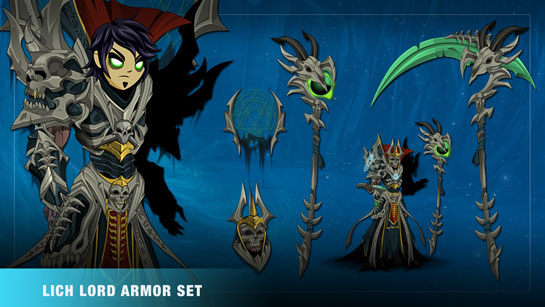 These sets were crafted by Aranx, and for the Legion exclusive variant, he tried something pretty unique in AQWorlds - a visible back-arm permanently holding a weapon. 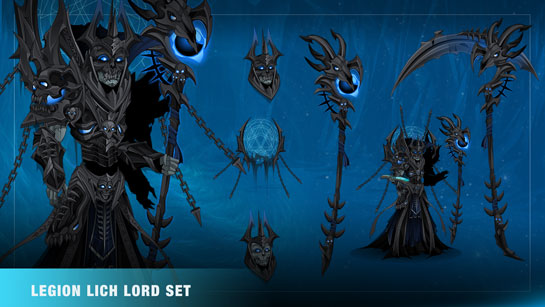 Two weeks ago, J6 and his incredibly kind, compassionate, and lovely wife, Cinazool, had a baby! J6 has been taking time off to bond with his new 2.0. He'd planned a funny release to explain his absence but -- like with everything in game development and babies -- sometimes life throws you a curveball. He and his family are doing well; we're all incredibly excited and happy for him, and cannot wait for J6, Cinazool, and little Vlad* to come visit the Secret Underground Lab.
(So if you see a lot of background art being creatively recycled this week and for the next several, now you know why. Family comes first at Artix Entertainment, and we want him to get to enjoy as much time with his son as possible before picking up his stylus and powering his monitor back up.)
* Not his real name. His real name is even cooler. But classified.

Wheel of Doom update: Find an all-new color custom Cyber Samurai set from Crulon in the Wheel of Doom and Doom merge shop!

If you have the original, all-black version you can keep it as-is, or change it in Vinara's Odds Shop in /battleontown to get the fixed version for free.

Shadow SoulSeeker BattlePet update: this battlepet will not make it in-game in time for this year's Black Friday Shop. Apologies to those who saw the tweet about it and were looking forward to it. We will add it to the list for next year.