Tradeskills are coming to AQW 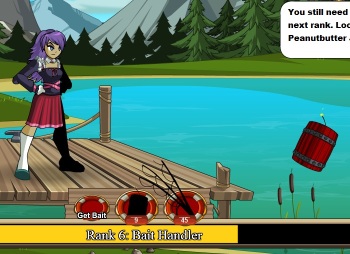 It's not a minigame... kind of. You'll be able to actually fish, but you'll be able to rank up 30 levels of your Fishing skill (and eventually skills like Blacksmithing, Potionmaking, scroll-scribing, etc), and receive different gear and items to earn at each of the ranks! 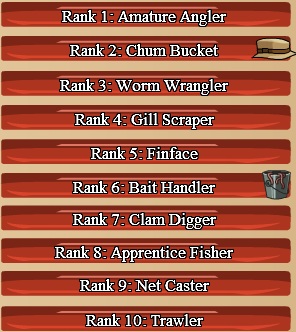 You'll also buy fishy-looking gear that will enhance your abilities! Members will gain access to extras like the Super-pole! (Catch 3x the fish in one cast!) And speaking of FISH... there's a whole school of different, tasty fishies to catch and cook up (once Cooking is introduced, that is)! There's also the possibility of the fish you catch being able to increase your HP, STR, or other stats at some point in the future!

Just wait until you catch the Jumbo Shrimp!

Look for this deliciously exciting release to be introduced February 17! Dumoose has been the angler-wrangler for this project and says that testing is going swimmingly! We've got ideas in mind for other tradeskills to introduce as the year goes on, each with their own member and AC bonuses, but what would YOU like to see? Let us know on Twitter and the forums!

This is the start of a whole new type of AQW gameplay, and we're looking forward to building the different skills up with you all to be as awesome as possible!

Rocks rumble and crystal shatters; the earth is unsteady and it's up to YOU to get Etherstorm's defenses in order before the world begins to break apart! Head inside the mystical, magical crystal realm which houses the Earth Realm's secrets! Battle crystallized elements as the earth fights back, but be careful... things could get rocky!

Desoloth is getting ready to launch an all-out attack and if your plans are not in place before he does, the elemental war he's planning will tear Draconic society - and all of Lore - apart!

Lets not have any quibbling over this announcement, because the items Quibble Coinbiter - our favorite time-traveling salesmoglin - will bring are going to be fundamentally, elementally EPIC! Look for more previews of them as the week goes on! You'll find him in Battleon, shop open and shelves stocked, this Friday!

HEY MEMBERS! Are you ready for another mid-week member-only release? You are? GREAT! Because we've got one in the works for you, and it'll take place in the much-beloved, long-ago released Cornelis map in Chiral Valley! Things are going to get pretty twisted, and the residents there need YOUR help to straighten their lives out!

Thanks so much to Captain Sephira for the extra-special Aussie swag she sent to help us celebrate Augstralia Day! It arrived this morning and Cysero and I paraded through the halls of the Lab showing off all the sweet gear from a different hemisphere!

But the Australia cape (which looks great with my shirt today, coincidentally!) and flags were not all! We've received pins, a GIANT FOAM FINGER, and the wicked umbrella hats you see in the picture below! Beleen also trumpeted her excitement at the swag to the whole team when she blew on the Extra-Special Aussie NoiseMaker (tm)! 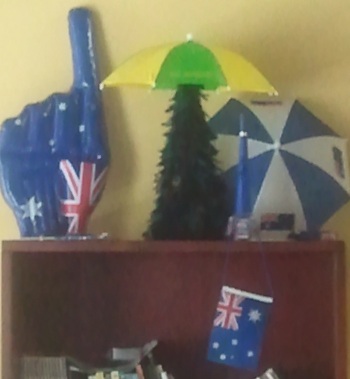 The foam finger points away from Australia.

Once again, thanks to Captain Sephira for the epic gear and rockin' letter! Happy belated Australia Day, everyone!