The Necropolis is a subterranean lair filled with the undead, necromancers, liches and unfathomable shadow creatures. Last week you ventured deep into its dark heart, battled the 5-headed dracolich, and discovered untold secrets. It appears Sally is re-building Vordred... "bigger, stronger, more skulls." This week, you have only one simple goal... go up one level and stop her from completing that abomination. Just go up one floor. It should be trivial for a seasoned adventurer like yourself. Stop the Necromantress Sally from completing Vordred and you will 100% complete DoomWood... 3 weeks early. But WHATEVER YOU DO... do not... for the love of all that is good... DO NOT go down. Who knows what horrific things lay deeper under the Necropolis.

All of AQW's artists have been pushing hard this week to release new items to fill your inventories to bursting, and MAN did they do a great job! Check out this gear! (All found in the /necropolis and /necrocavern maps!) 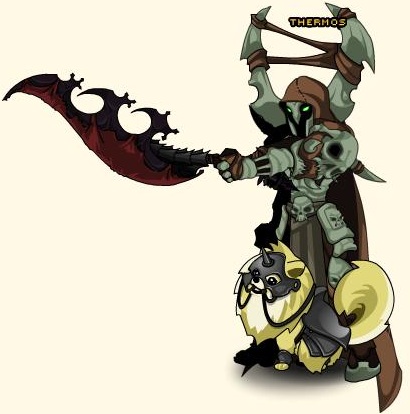 All of Doomwood's gear this week is either member or free-player gold and can be found in the Doomwood II Rep shop, the Paladin and Necromancer shops, and both the Artix and Vayle merge shops, plus all of the sweet accessories that drop off the monsters! 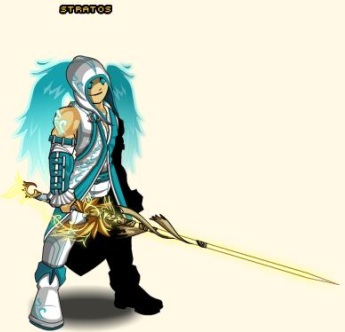 Alright, you Nulgath fans, tonight's the night! Ready to take on and take down all those Legion followers? Here's your chance to get the gear that proves your loyalty to your favorite artist! Check this post from last night's Design Notes for item and price previews and find Nulgath in Battleon! Summer is Coming... and so is WAR!

"Sepulchure", by Dage the Evil

As many of you are very familiar, Sepulchure, the DoomKnight, was the main villian of DragonFable and everyone believed he was going to be the main villain of AdventureQuest Worlds until the shocking twist when Drakath ripped his very essence from his chest and crushed it at the beginning of the game.  From that moment on, Sepulchure's daughter Gravelyn became the leader of the Shadowscythe.

Many villains protested that "a little girl wearing her daddy's scary armor" was unfit to rule the forces of Evil. Thus far there have been three seperate attempts from villains to overthrow her. It has been difficult for her, filling the shoes of the most powerful DoomKnight who ever un-lived. But there is something special about Gravelyn... and a special bond between her and the heroes of the world (both Evil and Good.)

As you are about to discover tonight, the focus of our continuing story in DoomWood is not about Artix... it is Gravelyn's story. It will be dark. Alas, to understand her, you really need to understand... the DoomKnight Sepulchure.

"Sepulchure" painting by Dage the Evil

We uploaded the high res 1920x1200 Wallpaper of it for you to get into the spirit of DOOM with!

While I am on the topic of Sepulchure... check out this picture from our photoshoot in the HeroMart chamber yesterday. Both the Artix and Sepulchure figures will be available starting May 18th at U.S. based Toys"R"Us stores and www.HeroMart.com. The figures will be $20 and include 5 exclusive cards for the card game, and a treasure chest of in-game items including a special class, armor, weapon, helm and castle (castle has a working trap door feature.) These are our first ever action figures... so we really went overboard. There are also special "black armor variants" for which will be $50. 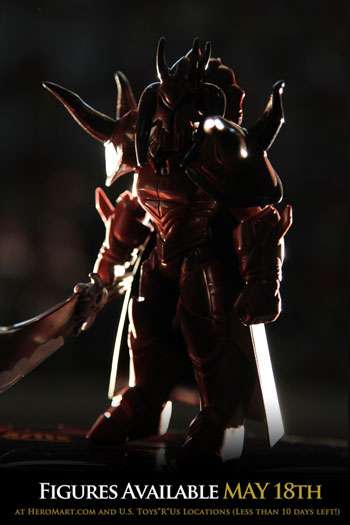