Log in to Battleon to get your own Daimyo Pet!

Wish happy birthday to everyone's favorite undead-slaying battle puppy*! Each year on his birthday(today!!!) Artix adds Daimyo into Battleon, so heroes can buy him as a pet. This started in the original AdventureQuest, and has become a yearly tradition. Log in through tomorrow to celebrate everyone's favorite "fearless undead slaying" battle puppy by getting your own to travel alongside you! 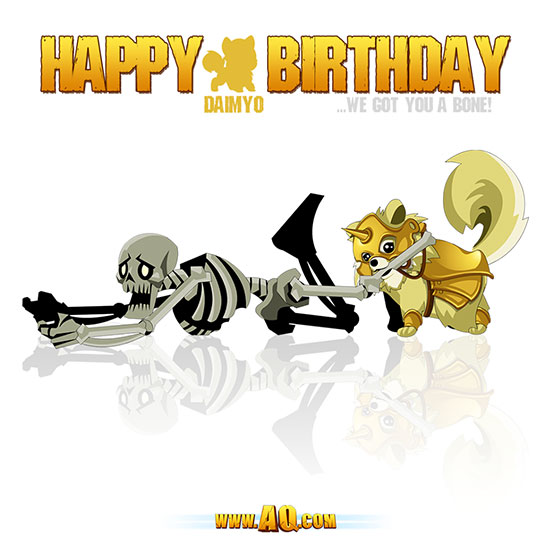 * Wish him Happy Birthday on his official Daimyo FaceBook page!

Though some of you might not know this, Daimyo often comes to the Lab with Artix.* Whenever he's here, we feel EXTRA safe from any potential undead army attacks... or student tour groups... or the lunch cart... or Herormart package delivery men...

Those are some of my favorite days at the Lab, because though Daimyo is FIERCE, he can also be pretty sweet. Especially when he wants a treat.

The Legend of Daimyo

Once upon a time there was a feudal lord from a great Eastern Kingdom. He battled an evil Witch, who cursed him into the form of an adorable puppy. While undertaking the perilous quest to return to normal, he befriended and became the faithful companion of the Paladin, Artix. No one knows Daimyo's secret or what quest is required to return to normal. Mostly because every time he tries to speak it comes out as cheerfully high pitched, "Arf!"

Daimyo has many fans, but especially rare pet collectors! So many of you get so excited when his birthday rolls around that we began giving him a new outfit every year (Vampire, Derp, DoomKnight, Dage's Legion and more). The goal is to collect as many as you can! After Daimyo leaves Battleon, you'll be able to quest through one of Artix's Summer releases to get the Astro Daimyo shown below. 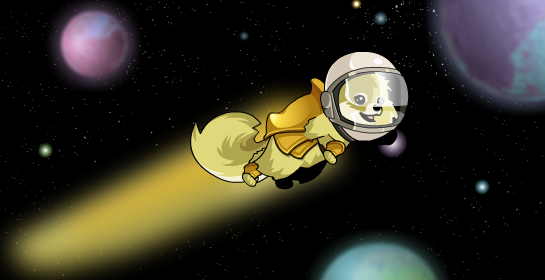 The Daimyo pet themes usually hint at what's to come in the storyline. If you've been paying attention to Artix's Twitter, you might just be able to guess what's coming soon!